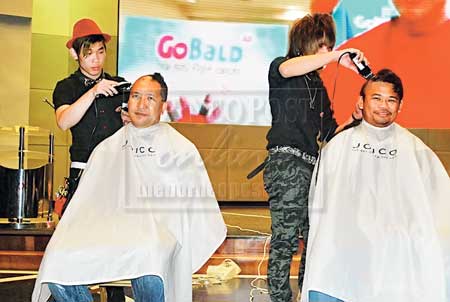 Take acute leukaemia as the example, he said, the possibility for a child to recover from the illness is as high as 80 per cent.

“Leukaemia is the commonest type of cancer among children. With the advance in treatment, a lot of cancers affecting children are curable. For instance, the curable rate for acute leukaemia is between 75 and 80 per cent, which was unlikely to happen in the past,” said Henry at the opening of ‘Go Bald – Help Kids Fight Cancer’ Unimas Satellite Shave event at Universiti Malaysia Sarawak (Unimas) campus here.

Henry, who is also the academic staff of Faculty of Medicine and Health Science of Unimas, pointed out that many people have a negative perception on cancer as they thought cancer is infectious.

“Many patients and their families are also worried about the treatment such as chemotherapy and radio therapy. It is true that these therapies will cause some side effects, but all are temporary. It will disappear when the patient recovers from the illness.”

He, therefore, felt that more efforts should be done, such as through awareness campaigns, to better educate members of the public as well as other relevant parties on cancer.

Praising the effort of Sarawak Children’s Cancer Society (SCCS) to help the cancer stricken children and their families, Henry stressed that Unimas will continue providing necessary support to the society.

Unimas helped to raise a total of RM12,479 for SCCS with 65 people, comprising staff and students, going bald yesterday.