Sunday, February 5
You are at:Home»News»Sarawak»Early voters first to use indelible ink
For the freshest news, join The Borneo Post's Telegram Channel and The Borneo Post on Newswav. 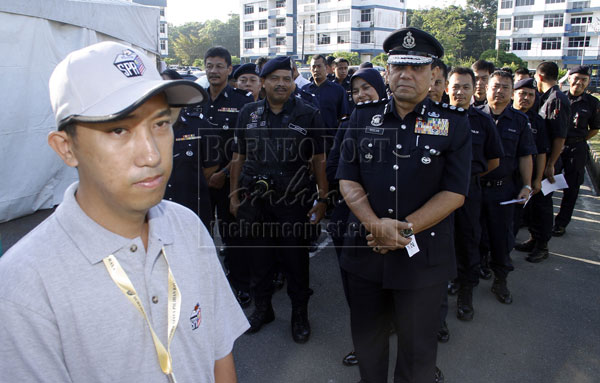 EARLY VOTERS: Roslan leads the way as policemen stand in line to cast their votes at Tabuan Jaya police headquarters. 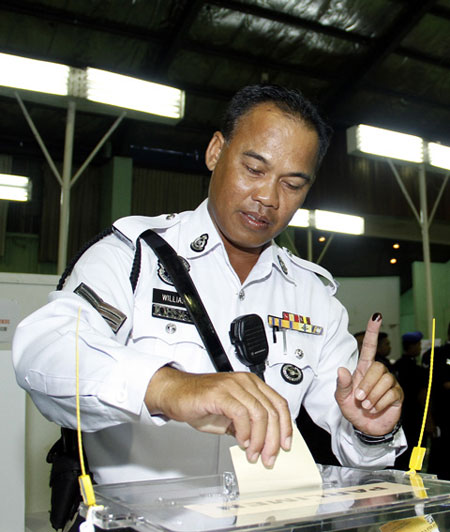 DUTY FULFILLED: A traffic policeman carefully places his ballot paper into the ballot box while holding up his marked index finger to air dry it as well as to prevent smudge and mess.

KUCHING: Early voting for security and armed forces personnel and their spouses went smoothly and in an orderly manner here yesterday.

Incidentally, the inaugural batch of advance voters was the first to use the indelible ink in Malaysia’s election.

The security personnel lined up as early as 8am at designated polling centres in contingent headquarters and military camps across Kuching to cast their votes.

At the Tabuan Jaya police headquarters here yesterday, the police personnel were led by

Each and every one of them came out of the polling centre with a smile on their faces and stained index fingers proving that they have voted.

BN-SUPP Bandar Kuching candidate Tan Kai, who visited the polling station, took the opportunity to have a light moment with the policemen. He was accompanied by SUPP secretary-general Prof Dr Sim Kui Hian.

In Sarawak, a total of 21,336 police and army personnel and members of the General Operations Force and their spouses are registered as advance voters, said state Election Commission (EC) director Datuk Takun Sunggah.

Of the figure, he said 12,000 were army personnel and their spouses.

They were among a total of 272,387 policemen, army personnel and members of the General Operations Force and their spouses eligible to vote at 544 polling stations throughout the country.

Altogether, 53 polling centres with 69 streams were opened for them throughout the state yesterday.

The voting process is similar to that of normal polling day, which involves the use of a ballot paper and a box for submitting the ballot paper. 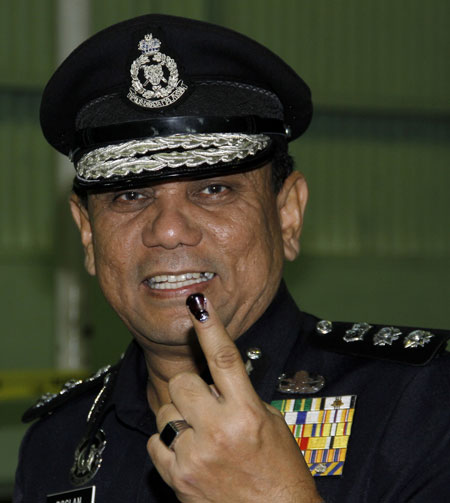 Voting was expected to close at 7pm but early votes were not counted yesterday as the counting would be done on the actual polling day at 4pm.

Thereafter, the boxes are loaded into a special bag and transported to the police lock-up where they will be guarded round the clock. #myvote13 #ge13