Saturday, May 30
You are at:Home»News»Nation»Najib among party leaders who cast their votes today 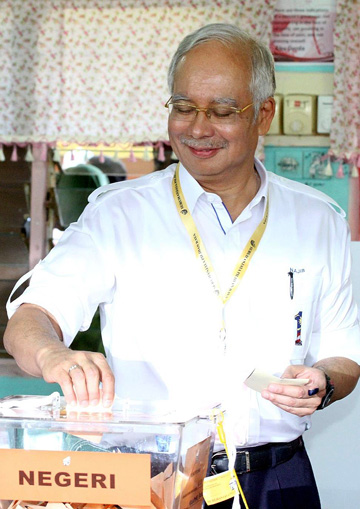 KUALA LUMPUR: Prime Minister Datuk Seri Najib Tun Razak is among the political leaders who cast their votes today in the 13th general election (GE13) to choose the government that will rule the country for the next five years.

Clad in white shirt, Najib and Rosmah, who was dressed in pink baju kurung, and their son, Norashman arrived at the polling centre at 9.10 am.

Najib, who is defending the Pekan seat which he held since 1976, faces Parti Keadilan Rakyat’s Mohd Fariz Abdul Talib in a straight fight. They arrived at the school at 8.10am and were among the earliest voters who voted at the polling centre which opened at 8am.

Both of them completed the voting process at 8.20am and spent some time posing for photographers while showing off their index fingers marked with the indelible ink.

The tussle for the Pagoh parliamentary seat is between Muhyiddin and Mohamad Rozali Jamil of PAS.

In the 2008 polls, Muhyiddin won the seat by defeating Mohamad Rozali with 12,581-vote majority.

He won the seat in the by-election in August 2008 by defeating Barisan Nasional (BN) candidate Datuk Arif Shah Omar Shah with 16,210-vote majority.

The by-election was held after his wife, Datin Seri Wan Azizah Wan Ismail, who held the seat for two terms, resigned after winning the 2008 polls.

Lim, who is also DAP secretary-general, is defending the Air Putih state seat and Bagan parliamentary seat which he won in 2008. 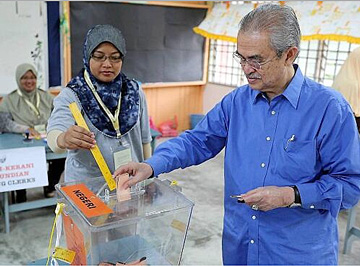 Dr M and Siti Hasmah show their finger stained with the indelible ink.

Abdul Ghani is facing DAP advisor Lim Kit Siang in the contest for the Gelang Patah parliamentary seat, which was described as the ‘mother of all battles’.

The Perak BN chairman, who was accompanied by his wife Datin Seri Saripah Zulkifli and family members, arrived at the polling centre at 9.10am.

In SEMPORNA, Umno vice-president Datuk Seri Mohd Shafie Apdal had cast his ballot at Sekolah Kebangsaan Pekan Semporna at 9.15am.