Wednesday, August 5
You are at:Home»Sports»Watersports»Pandelela grateful for recognition from state govt 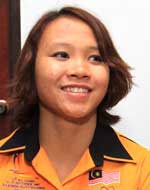 KUCHING: National diver Pandelela Rinong has expressed her gratitude to the state government and the Ministry of Social Development for recognising her achievements in sports.

The swimming pool will be dedicated to the achievements of Pandelela who hails from Kampung Jugan, Bau.

Last year in London, Pandelela became the first Malaysian woman to win a medal at the Olympic Games.

Mawan disclosed the project costing RM14 million will be implemented by the BN government during the next Malaysia Plan (2015 to 2020).

“The swimming pool will be built near the present Mini Stadium and it will also become part of an integrated sports centre for Bau,” Mawan said.

Speaking exclusively to thesundaypost yesterday, Pandelela is optimistic that more Sarawakians will continue to do well in aquatics sports in the future.

“If it is because of my achievements that an aquatics centre is to be built in Bau, I am indeed grateful and at the same time thankful. I hope it will also help unearth more talents not just in Bau, but the rest of Sarawak as well,” she said in a phone interview.

She added that the state is doing a good job in investing in aquatics sports as she believes that there are more talented athletes out there.

With more aquatics facilities being built in Sarawak, Pandelela reminded the youngsters about not wasting the opportunity of using the facilities to bring more honour to Sarawak and the country.

She also vowed to work even harder in bringing more honour for Malaysia.