Monday, March 1
You are at:Home»News»Sabah»Police warn trouble-makers of stern action 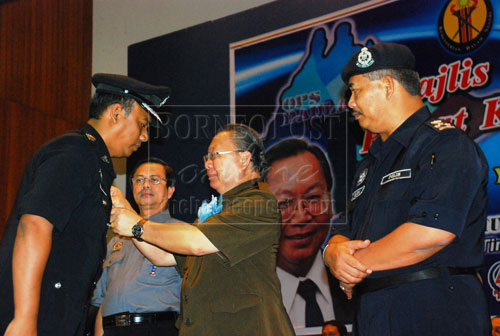 Pairin presenting the National Sovereignty Medal to one of the 12 security forces’ personnel, witnessed by Hamza and Daud.

TAWAU: Sabah Police Commissioner Datuk Hamza Bin Taib advised the people not to be afraid to come out to vote today because security in the country, including Sabah, is under control.

Hamza said they had enough strength to carry out patrols and maintain security on the polling day.

More police officers and personnel would be placed at the Eastern Sabah Security Command (Esscom) along the coastal waters from Kudat to Tawau for security enhancement, he said at a press conference here after attending the National Sovereignty Medal presentation held at Lau Gek Poh Foundation Hall here yesterday morning.

Hamza said the police had not received any report of serious cases of election-related offences so far.

“However, we warn supporters of political parties to accept the results after the polls without going against the law or stern action would be taken against them.

“The police will always monitor the situation based on the principle of democracy in the country to ensure chaos will not occur during election period,” Hamza said. 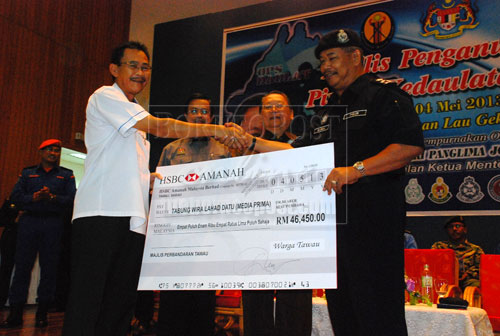 Ismail handing over to Hamza RM46,450 in donations from Tawau community for the Lahad Datu Heroes Fund, witnessed by Pairin and Daud.

According to him, awarding the medals was apt in appreciation of the deeds and sacrifices of members of the security forces involved in flushing out Sulu terrorists at Kampung Tanduo, Lahad Datu and Semporna.

He said the state government and the people were thankful and appreciative of the sacrifices of the security forces in defending the sovereignty of the nation.

“Without them, it is not certain that we, as citizens, can enjoy the peace and prosperity of the country.

However, he said the Royal Malaysia Police would never compromise with any parties trying to intrude into the country.

In line with the transformation program (2013-2015), the police would strive hard to reduce crime towards zero status, he added.

In the ceremony yesterday, 12 enforcement officers from Tawau and Lahad Datu were awarded the National Sovereignty Medal.