Thursday, June 4
You are at:Home»News»Sarawak»400 watch live streaming of rally 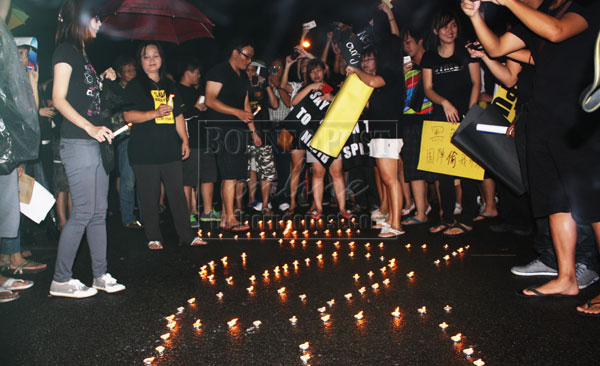 SEEKING JUSTICE: Some Pakatan Youth members lighting up candles which were lined up in the shape of the word `BERSIH’, while others carry placards.

KUCHING: More than 400 Pakatan Rakyat supporters braved a light drizzle and gathered at the Third Mile Bazaar carpark here last night to watch the mammoth rally taking place in a stadium at Kelana Jaya, Selangor, on a medium-sized screen.

The Pakatan Rakyat rally was to protest the results of the May 5 general election. The happenings in Kelana Jaya were live streamed via the Internet.

Met at the PKR Stampin office nearby, Batu Lintang assemblyman See Chee How, who is also state PKR vice chairman, estimated the crowd as at 8.30pm to number about 400.

They started arriving at about 7pm, bringing along umbrellas.

Those standing in front of the crowd were later requested to sit down to enable those standing behind to have a clear view of the screen.

Besides watching the rally live on screen, another highlight of the gathering was a vigil where Youth members lighted candles and lined them on the ground to make out the word ‘Bersih’.

Some Pakatan Rakyat loyalists wore black attire to mark the occasion while others carried placards bearing words insinuating that the BN and the Election Commission were cheats.

Each time a group of `cheer leaders’ screamed vulgarities against certain top BN leaders some in the crowd would lend their support by jeering.