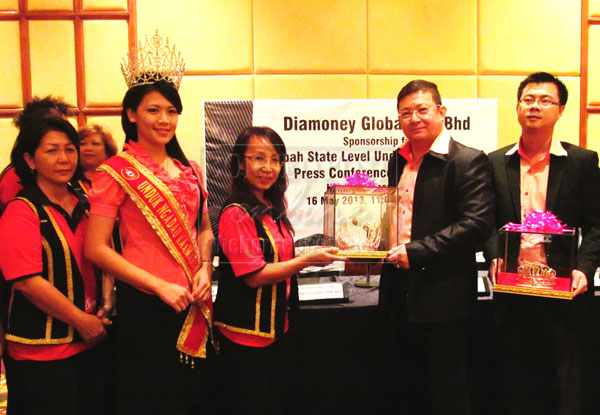 OVER TO YOU: CEO Hubert Ng (2nd right) handing over the tiara to Boilis during the press conference yesterday

KOTA KINABALU: This year’s Unduk Ngadau will be crowned with a RM30,000 worth of tiara made with Swarovski Zirconia gemstone.

The sponsor, Diamoney Global Sdn Bhd (Diamoney), has been a strong sponsor for Unduk Ngadau Kaamatan since 2012 for the Kota Kinabalu city and the state-level grand finale.

Its chief executive officer (CEO) Hubert Ng said Diamoney was proud and honoured to be the sponsor again for the Unduk Ngadau Kaamatan, with a total of sponsorship of RM130,000 for both events.

“Last year was our first time sponsoring Unduk Ngadau Kaamatan, and we are more than ready to sponsor for this year’s event. We customise the tiara for this year’s winner, where the motive of the tiara is paddy to symbolise the Kaamatan itself.

“For the Kota Kinabalu pageant, total prize worth RM40,000 in the form of crowns and jewellery have been allocated for the winners. As for the state-level, the total prize increases to RM90,000 inclusive of two tiaras, cash vouchers and also jewelery sets for the top three winners,” he said in a press conference at Le Meridien Hotel, yesterday.

Founded in 2005, with the first promotion kiosk opened at the corridor of Kota Kinabalu International Airport, Sabah, Diamoney has grown and expanded nationwide.

The secretary of 2013 State-level Unduk Ngadau Kaamatan committee, Angeline Boilis said the two other tiaras will be presented to the winner of subsidiary titles on the Gala Night.

“Diamoney sponsored us three crowns, the biggest one is for the winner, while the two crowns will be given to Miss Friendly and Miss Natural Beauty.

“We are thankful with the sponsorship from Diamoney, and hoping for a further cooperation with this Swarovski strategic alliance to sponsor this event in the future,” she said.

Swarovski is a company founded in 1895 in Austria with 25,000 employees worldwide. Swarovski is the brand name for a range of precisely cut crystal and related luxury products, including crystal glass sculptures and miniatures, jewellery and couture, home décor and chandeliers.

Apart from the top three winners, Dianomey is also sponsoring jewellery to the fourth to seventh placing of this year’s Unduk Ngadau pageant worth RM800 each and also lucky draws for the guests on Gala Night.