Tuesday, August 9
You are at:Home»Features»Walking for a good cause 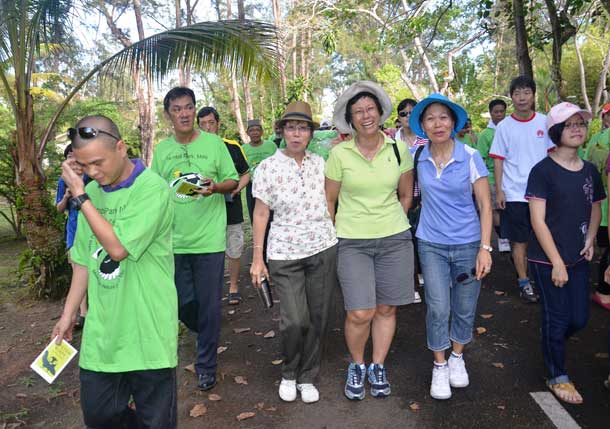 JOLLYGOOD WALK: A section of the 600 people who took part in the first Walk in the Park. – Pictures courtesy of Musa Musbah from Malaysian Nature Society (MNS).

THERE are compelling reasons to preserve Piasau Camp in Miri.

First, preservation will – among other things – ensure the historical significance of the place is not lost on the present and future generations. And secondly, in terms of conservation, the survival of the wildlife found in the area, especially the oriental pied hornbill, which is totally protected under the State’s Wild Life Protection Ordinance (1998), will be greatly enhanced.

Piasau Camp is synonymous with Miri’s oil and gas industry that could be traced back 100 years, starting with the first oil well dubbed The Grand Old Lady on Canada Hill.

The hornbill, on the other hand, is indisputably the king of birds in Sarawak which is also known as the Land of the Hornbill. Also, the hornbill is featured in the State emblem.

The forested area around the Camp was cleared in the 1950’s to build 175 wooden houses for Shell employees. Located northeast of Miri and separated by Miri River opposite the city centre, it is a peaceful expatriate community with no fencing. 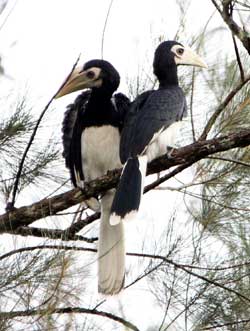 Camp to be closed

It is said Piasau Camp will be relinquished to the government soon although the land lease to Shell extends to 2029.

While Shell Malaysia chairman Ian Lo recently assured the company will not relinquish the land, except for lots at the riverside, his confirmation that the housing quarters at the Camp will be closed by September this year has caused concern among Mirians, particularly history and Nature enthusiasts.

This had prompted some 600 Mirians from all walks of life and the expatriate community to join the inaugural Walk in the Park on April 6 to support calls to make the Camp a permanent Nature Park to be called Hornbill Park.

The idea of the Walk was mooted by Datuk Sebastian Ting, the then political secretary to the Energy, Green Technology and Water Minister, and the Malaysian Nature Society (MNS), Miri Chapter, chaired by Musa Musbah, who is also the honorary wildlife ranger of SFC.

Due to the overwhelming response to the first Walk, a second Walk in the Park will be held today (May 19), starting at 4pm at the Tenby International School.

Concerned Mirians and visitors are urged to turn up in full force to support the proposed setting up of the Hornbill Park at the Camp. Once established, it will be the first park in the country specially dedicated to the conservation of hornbills.

Ting has urged Shell and the authorities concerned to preserve Piasau Camp as a permanent Nature Park to protect the hornbills – and also as an re-creational area for the present and future generations of Mirians.

“This is a beautiful place within walking distance from Miri city. Just imagine so many people are coming for the Walk today – more than 500 Mirians very concerned and would like to see what’s next for Piasau Camp.

“If you ask around, most people want to keep this place as it is. Miri came about because of oil and part of this oil is Piasau Camp. We have 100 over acres here,” he said.

Mairead Boland, a data manager from Holland working with Sarawak Shell, concurred with Ting on the urgency to set up the Hornbill Park.

“We came here in June. Previously we were in Brunei and Kuala Lumpur but we really want to be here close to the sea and the Park is gorgeous,” she said.

Mairead and her retired husband, David Daton, an avid bird watcher, are among over 20 families still staying at Piasau Camp.

For another Shell staff, Wouter Rensink and his wife Alice, Piasau Camp is also close to their hearts.

“I came here in 1978 on my first posting, so I know this Camp quite well. It’s the only place in Miri where you can walk and cycle safely – and I see many people cycling here. It’s pity that an area like this will be gone soon,” he said.

Rensink, a training graduate from Holland, has been staying at the Park for almost 15 years and he loves to walk their dog, Sara, there.

Dr Tarek Latif, a former surgeon with Miri Hospital, said: “It’s good to keep the Camp as a Nature Park for people to enjoy. People are happy and healthy – and the birds are happy too.”

Rogayah Zainuddin, treasure of the Miri Amateur Swimming Association, said Piasau Camp has been her family’s home for 19 years up to the time her late father Temenggong Zainuddin retired from Shell.

“I really miss staying here – so peaceful. When we first moved out to our own house, my father insisted we shouldn’t install grills on our windows and doors. But soon, the burglars had their ways and we were forced to install grills. It’s not like here at Piasau Camp – we had the birds and edible plants – no burglars,” she said. 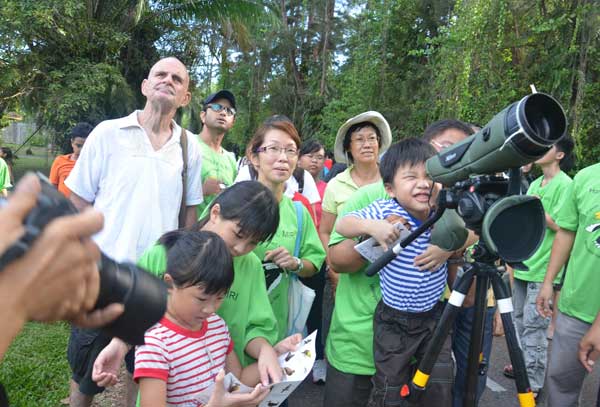 CURIOUS: A young naturalist watching birds through a telescope.

Several studies have been conducted since 2006 at Piasau Camp and the surrounding areas.

Musa and Anthony Wong were among those behind the studies to identify bird species in the area and their conservation status as well as other species requiring special protection. They will come up with recommendations in a masterplan for the project site.

The first report of these birds breeding in the area was made in the 2006 by a Dr Giana. In early 2010, some of the birds flew out of their safe haven, foraging for food around Miri, Piasau Utara and Lutong. This was when a lot of sightings was reported.

After doing numerous interviews, Musa concluded that the hornbills had been farmed and hunted by people who had access to the area. They farmed these birds under the very nose of Piasau residents.

He said surveys showed at least 15 hornbills and many other types of birds such hill myna, little egret (egretta garzetta) and intermediate egret (mesophoyx inter-media) have been found at Piasau Camp since 2006.

“The maximum number reported was 15. Five were seen flying around the Miri Golf Club course, Piasau Utara, Lutong, Piasau Jaya and Miri City itself which is outside of their safe area.

“Until today, the whereabouts of the rests are not known. They could have been killed by irresponsible people. I heard a lot of such stories when I was watching these birds,” Musa added.

Musa’s latest observation on May 14 revealed that the nest that is two metres above the ground is occupied – and the female oriental pied hornbill will lay and then incubate her eggs for 112 days (3.8 months) before coming out into the open.

There is a lot of traffic noise from trucks, delivery vehicles and cars. At any time of the day, people are jogging and talking loudly while children are cycling or running along the foot path parallel to the road.

“It would appear from current observations that a noisy, busy urban environment is not a deterrent to the selection of a nesting site and to successful breeding,” he said, adding that while hornbills are mostly forest birds, the oriental pied is the exception.

“As long as there are sufficient food and cavity trees for nesting, it is able to survive around human habitation,” Musa explained.

He said hornbills are people-friendly, putting them at high risk to poachers.

“Hornbills are monogamous – they pair for life. The male is the sole provider. So it would be tragic if the male is killed while its mate and the chicks are still inside the nest. The whole family will be wiped out. Moreover, the female and the whole brood also depend on the male to break the nest from outside when the time is right.”

Quoting the report by Wong on past bird surveys around Miri region and field surveys in and around the study area at Shell Lutong facilities and Piasau Camp, Musa said total of 102 bird species from 39 families have been recorded.

Of the lot, 12 are considered globally threatened, 34 protected under the Sarawak Wild Life Protection Ordinance 1998 with three listed as totally protected and the rest protected. One endemic species (dusky munia lonchura fuscans) was also recorded.

“The oriental pieds were recorded within the forested area of Piasau Camp. It is believed the mature forest there provides the necessary breeding grounds for them,” Musa added.

Wong’s report recommends that mature forest within Piasau Camp be preserved for the survival of these magnificent birds.

Feb 13 is Love Hornbills Day and it is a big affair in Thailand and India but not so much in Malaysia.

It was a day initiated by Prof Pillai Poonswad, a pioneer in hornbill conservation in Thailand and hailed as the Great Mother of the Hornbills more than 30 years ago. Her purpose was to save threatened hornbills and their rainforest habitats.

Malaysia is home to 10 of 54 globally known species of hornbills, eight or nine of which are found in Sarawak.

Piasau Camp is home to the oriental pied and the wrinkled hornbills.

In Malaysia, penalties for keeping hornbills as a pets and for killing, hunting, capturing, selling, trading or disturbing them, or possessing any recognisable parts of the bird are severe – a RM25,000 fine and three years’ imprisonment.

All hornbills are revered and the rhinoceros species seems to hold a special place in most Sarawakian native cultures. It is closely associated with the god of war and of bird of omen – Singalang Burong, a significant figure in Iban legends and folklores. The festival of Gawai Burong is held in its honour.

The Orang Ulu community believes the casque (the distinctive curved, bony growth from the head of the rhinoceros hornbill above its beak) holds mystical powers and whoever owns one could use it to control and influence another person.

The horn, when carved, can be worn as accessory such as pendant and ring while the unique black and white tail feathers are used to adorn traditional head dresses and regalia used only during the most grand and sacred of occasions.

This widespread reverence for the rhinoceros hornbill is one of the reasons why the bird forms part of Sarawak’s State Crest and is the State bird.

The setting up of the Piasau Camp as Hornbill Park is thus very timely. It will also complement efforts to make Miri a preferred resort city in the region.