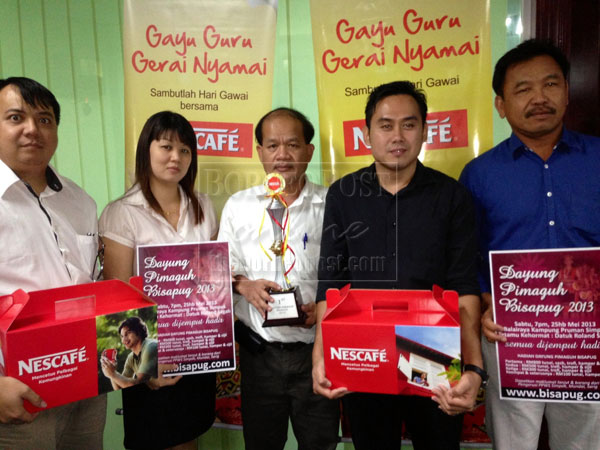 ATTRACTIVE PRIZES: Paul (centre) and Tony Merril (Nestle Sarawak event manager) and others holding some of the prizes for the winners. Albert is at right.

KUCHING: The Bidayuhs of the Bisapug clan will be organising a beauty pageant in conjunction with the coming Gawai Festival.

Called the ‘Dayung Pimaguh Bisapug’ (Bisapug Beauty Queen), the pageant will be held this Saturday at Kampung Simpok community hall and opens only to single ladies aged 18 to 25 of Bisapug origin.

This contest, held for the fourth year, is best known as the launching pad for Livonia Ricky, who became Miss Borneo Beautiful 2010 a year after winning the Dayung Pimaguh Bisapug.

The beautiful and talented Livonia then went on to make Sarawak proud by winning the second season of the Pilih Kasih talent search programme which was televised ‘live’ nationwide.

“Participants must exhibit and wear the traditional Bidayuh Bisapug costumes during the event. For this year, the costume makes up 25 per cent of the score tally, beauty 40 per cent, intelligence 20 per cent and pose 15 per cent,” he said.

Yesterday saw the presentation of sponsorship from Nestle to the association. It was held at the office of SBA advisor Albert Tanon.