Wednesday, August 17
You are at:Home»News»Sarawak»‘1Malaysia Clean’ starts with trail of litter from Santubong 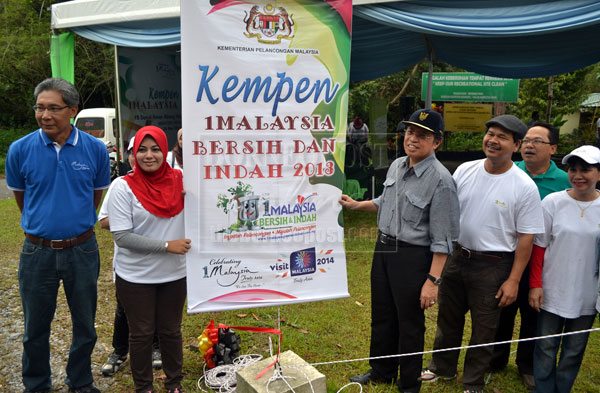 OFFICIALLY LAUNCHED: Abang Johari (third left), Salahuddin (left), Radiah (second left) and others during a photo-call beside the programme banner after the launch of ‘1Malaysia Green 1Malaysia Clean’ campaign.

KUCHING: Mountain hikers are reminded to be mindful in keeping the environment clean so that it can be enjoyed by others who are hiking there in the future.

State Tourism Minister Datuk Amar Abang Johari Tun Openg regrets the action of some hikers who discard their litter on the Santubong trails like water bottles and food containers.

“Hikers should prepare proper disposal of their rubbish so as not to destroy the beauty and cleanliness of the mountain,” said Abang Johari at the ‘1Malaysia Green 1Malaysia Clean’ campaign at the foot of the Santubong hiking trail near the Green Paradise Seafood restaurant yesterday.

He said that awareness is low on the matter and should be improved because the Santubong mountain is a tourist attraction.

“We must have a culture of keeping the mountain clean. This is not strictly about mountains, but also applies to beaches, national parks and other natural attractions.

“We have beautiful beaches like Pasir Panjang and Pasir Pandak which are suitable picnic spots on weekends,” he said.

In order to promote them, cleanliness is key to ensure that they remain attractive, he said.

Meanwhile, Sarawak has won the bid to host the International Conference and Convention Association (ICCA) conference in 2016 in Kuching.

The state beat Parague to host the world-class conference. This year, the conference was held in Latin America.

“We have won the bid for Kuching to play host to ICCA in 2016. We beat a major city in Europe, Prague for it.”

The conference will be held at the Borneo Convention Centre Kuching.

He added that efforts to promote Sarawak as the Meeting, Incentive, Convention and Exhibition (MICE) spot has been successful.

He said the number of tourist landings in the first quarter of the year has increased by five per cent compared to the same period last year. The increase is especially in the number of foreign tourists.

By year-end, total number of tourists to the state can reach up to 4.5 million people.

“I don’t want to set too high a target. We can hit over 4 million visitors if there are no problems in terms of flights to the state, he said.