Sunday, September 27
You are at:Home»Science & Technology»Google coming out with two new Android phones 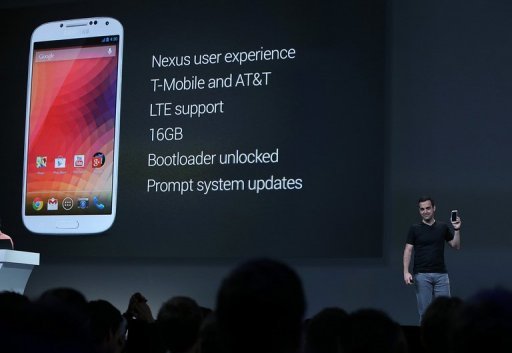 Hugo Barra, Google VP of product management for Android speaks during the opening keynote at a Google developers conference at the Moscone Center on May 15, 2013 in San Francisco, California. -AFP photo

Google revealed Thursday that it has two new sophisticated Android smartphones in the works, one of which will have the unprecedented distinction of being made in the United States.

An HTC One smartphone customized to be “Google’s take on Android” will make its US debut on June 26 at a price of $599, the head of Android, Chrome and Google Apps said at an AllThingsD conference in California.

Google Edition handsets by Taiwan-based HTC will be compatible with carriers AT&T and T-Mobile.

Pichai made the disclosure a day after Motorola Mobility head Dennis Woodside said on the same stage that the company’s was preparing to release its first smartphone since being bought by Google.

The smartphone would be called Moto X and be made in a facility near Fort Worth, Texas, Woodside said.

“It is the first smartphone that is going to be built in the United States,” Woodside said, noting that the plant would employ about 2,000 people by August.

“We think that it is going to allow us to innovate and iterate that much faster.”

Components for Motorola smartphones will come from Taiwan, South Korea, the United States and elsewhere with about 70 percent of the assembly done in Texas, Woodside said.

Moto X would set itself apart from other smartphones with advanced use of sensors such as gyroscopes and accelerometers to make devices adapt to the conditions or circumstances in which they are being used, Woodside said.

“It knows it is in my pocket or out of my pocket, and can anticipate use cases so it knows when I may want to take a picture and fires up the camera,” Woodside said, declining to show the smartphone on stage.

“Imagine you are in the car,” he continued. “The device will know, whether on or off, it is driving at 60 MPH (96 kilometers per hour) and it will act differently.”

The company completed its $12.5 billion purchase of the Motorola unit — which makes smartphones and other devices — a year ago, eyeing both its mobile phone line, which uses Google’s Android platform, and some 17,000 valuable patents.

Motorola Mobility was created in 2011 when US-based Motorola Inc split the company into a mobile devices unit and a government and public safety division known as Motorola Solutions. -AFP