Monday, September 26
You are at:Home»News»Sabah»71 houses hit by worst floods 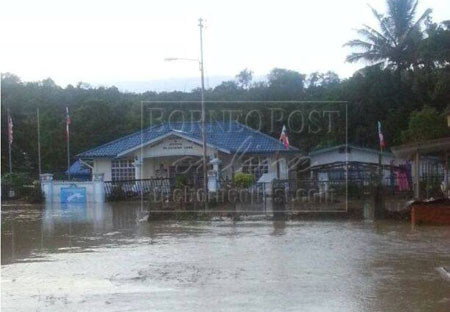 One of the houses badly affected by flood.

KENINGAU: Seventy-one houses at five villages in Mukim Apin-Apin here were hit by floods on Thursday when the Pegalan river overflowed its banks.

Villagers described the flood which destroyed their agricultural products and public property as one of the worst since Tropical Storm Greg hit Keningau in 1996.

A resident, Alex Amik when met at the handing over of aid contributed by Bingkor assemblyman Datuk Dr Jeffrey Kitingan yesterday, said the flood water came at 2am.

“A lot of residents’ properties were damaged, including public facilities. Losses have yet to be determined,” he said.

Jeffrey, who visited the flood victims yesterday, hoped the government could send assistance to the victims.

“Many public facilities, including residents’ properties, were damaged during the flood, including their agriculture farms and paddy fields that need to be addressed immediately by the government.

“I hope the government departments concerned would visit the scene to ensure the public facilities can be restored and assess the damage,” he said.