Saturday, October 1
You are at:Home»News»Sabah»Boy’s body recovered from river 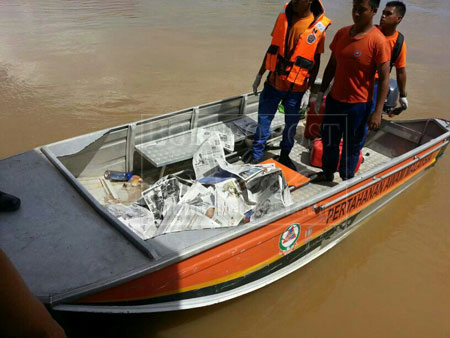 The victim’s body, covered with newspaper, soon after it was found in Sodomon River yesterday, some 18km from the place where he was reported missing on Tuesday.

KOTA KINABALU: The body of a nine-year-old boy who was reported missing and feared drowned while swimming in Babagon River in Penampang on Tuesday was recovered yesterday.

Jerome Jeremy Maratin’s body was found at 1.05pm by personnel from the Civil Defence Department (JPAM) in Sodomon River, Kepayan, about 18 kilometers from the area where he went missing.

Fire and Rescue Department public relations officer Senior Assistant Superintendent Mohd Affendy Ramin said the boy’s body was taken to the Queen Elizabeth Hospital for a post-mortem and family members had been notified.

Jerome was said to be swimming in Babagon River with two friends when they were swept away by strong currents on May 28 around 4.30pm.
His friends were however rescued by villagers who were near the scene.