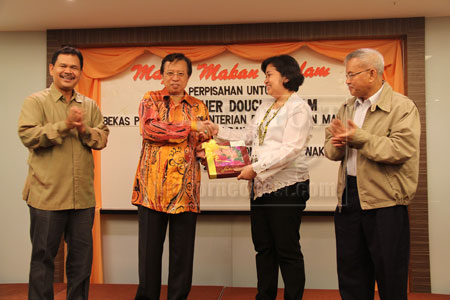 FOR A GOOD JOB DONE: Abang Johari hands over a souvenir to outgoing tourism director Esther (second right) while Ik Pahon (left) and Talib look on during the farewell dinner.

KUCHING: Tourism Minister Datuk Amar Abang Johari Tun Openg said the government has a plan to improve the infrastructure in the state in efforts to attract more tourists.

He said among the plans were the building of the Heritage Legacy project that will cover the area from Museum until the old State Legislative Assembly building, where a “special fund” is to be applied.

“The state government has a plan to improve the infrastructure of the state to attract more tourists, and among them are heritage legacy and the development of villages along the Sarawak River in Petra Jaya area.

Abang Johari, who is also Housing Minister, stressed that tourism was an important sector for the economy for the state and country.

For this, he pointed out that cooperation between the state and federal agencies was important to develop state tourism, adding that he was glad that the state had worked closely with Malaysia Tourism and supported by private sector.

“We need a strong team to develop this industry (tourism) as what is expected by the government,” he said.

He also expressed gratitude to Esther for her diligence in managing tourism matters over these few years.

Meanwhile, the outgoing director said that being in the post for about three years, she found it a challenging task.

Esther explained that tourism was not only about marketing, but the related agencies should also provide up-to-date products to attract more visitors and repeated visitors.

She said tourism agencies needed to ensure sustainability in the competitive industry and must be able to change, and she believes that tourism in the state was on the right track under the visionary Abang Johari and his assistant Datuk Talib Zulpilip.