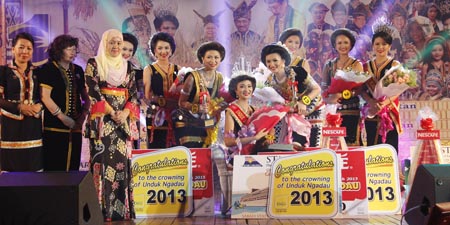 Ritchel Andreas of Ranau and Nillsey Debbie Sening of Tuaran were the first and second runners-up respectively.

“I did not expect to be at the top seven, but I am very happy after being announced as the winner. I am thankful for the support from my family, all their prayers were answered,” said the beauty queen who speaks English, Malay and Kadazan.

“Since I got the diploma scholarship, I have to arrange my schedule to further my studies. I might be doing it part-time because I am currently working at Shangri-La’s Tanjung Aru Resort & Spa,” said the third child among four siblings, referring to the scholarship she won as part of the prizes.

With the title, Immaculate will play ‘Huminodun’ of the Kadazan Dusun Murut to promote Sabah tourism until the next Unduk Ngadau is chosen next year. She is also expected to carry out social works such as raising funds for charities during her year-long reign.

She was crowned by Toh Puan Norlidah R.M. Jasni, the wife of Head of State Tun Juhar Mahiruddin.

The title comes with a RM1,700 pewter trophy with gold trimming which was sponsored by Deputy Chief Minister Tan Sri Pairin Kitingan, a tiara and jewellery set worth RM38,800 from Diamoney Jewellery Holdings Sdn Bhd, diploma scholarship from Asian Tourism International College worth RM25,000, a cruise package for two inclusive of air tickets sponsored by Star Cruises worth RM13,000, cash and hamper worth RM6,600 from Nestle and a smartphone inclusive of one-year free internet service from DiGi Telecommunication Sdn Bhd worth RM1,850.

Immaculate also received beauty products from Marie Aesthetic’s Beauty Spa worth RM300, a hamper sponsored by Albert Oliver House of Dresses worth RM600, a sash and a bouquet from the organizing committee worth RM450.

Ritchel, who received the most votes in a Facebook voting contest, was also named Miss Facebook Favourite, a subsidiary title that comes with a RM500 cash prize and photo-shoot session worth RM500 sponsored by David Aramaitii Photography.

The fourth and fifth spot finalists received a total of RM15,240,000 prizes from the sponsors, while sixth and seventh spot winners received RM14,080 worth of prizes.

The winners were selected by professional judges who evaluated their beauty and IQ level.

The Unduk Ngadau pageant is a tribute to legendary Huminodun, a beauty among the beauties who offered herself to be a sacrificial lamb to save her people from famine and certain death.