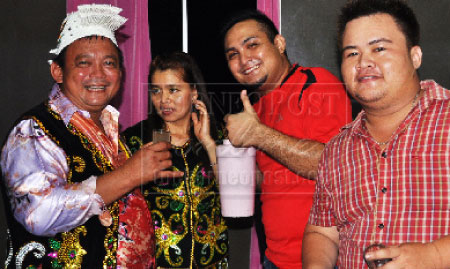 CONGRATULATIONS: A beaming Takuan making a toast with ‘tuak’ (rice wine) as the bride’s family congratulate him.

SIBU: The Gawai Dayak celebration, like any other festivity, is the perfect season to time a wedding ceremony, for the happy couple of Takuan Anyang and his bride Urie Martin Nyurang.

It was a memorable Thursday night for Tr. Martin Nyurang of Sg. Assan when his youngest daughter Urie Martin Nyurang tied the knot with her ‘Mr Right’, Takuan Anyang who hails from Rh. Juman in Sg. Asap, Belaga.

Even though the dinner reception was held on a moderate scale at Rh. Martin Nyurang, the evening was filled to the rafters with laughter, banter and joy as families from both sides gathered under one roof.

After dinner, the blessed couple who were resplendent in intricate hand-woven traditional costumes was invited to cut their wedding cake in a ceremony witnessed by the bride’s parents, Tr. Martin Nyurang and Sudau Bandau, the bridegroom’s mother Jumut Surat and her family from Sg. Asap.

Later, it was a flurry of cameras popping as the couple was swamped by families from both sides for photographs to be downloaded on their Facebook, an amalgamation of tradition and modernity for sharing the rare occasion with folk and kin in other longhouses and the outside world.

Takuan and his bride Urie then topped glasses for the guests to toast to their marital bliss.

As the night was still young, Rh. Martin was filled with laughter and merriment as everyone enjoyed the entertainment which included the spell-binding ‘ngajat’.