Wednesday, May 19
You are at:Home»News»Court»Doctor charged with outraging modesty of businesswoman 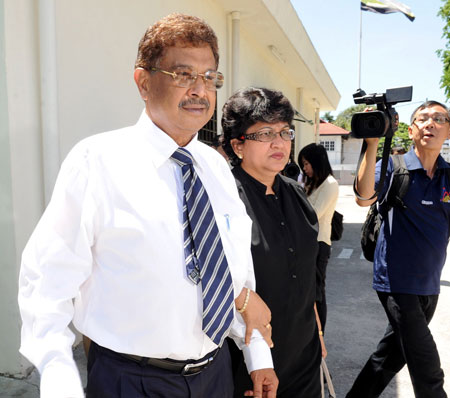 charged: Sivarajah (left) leaving after he was charged in court. — Bernama photo

IPOH: A doctor pleaded not guilty in the magistrate’s court here yesterday to a charge of outraging the modesty of a businesswoman at a polyclinic here last month.

Dr T.A Alagaratnam Sivarajah, 63, is charged with committing the offence on a 50-year-old woman at the polyclinic at Persiaran Sengat Baru Dua, Taman Bersatu, Simpang Pulai here between 11.30am and noon last May 22.

The charge, under Section 354 of the Penal Code, carries a imprisonment for up to 10 years or fine or whipping or any two of the punishments, if found guilty.

Magistrate Nur Syafiqah Noorinda allowed the accused bail of RM8,000 in one surety and set July 4 for mention.