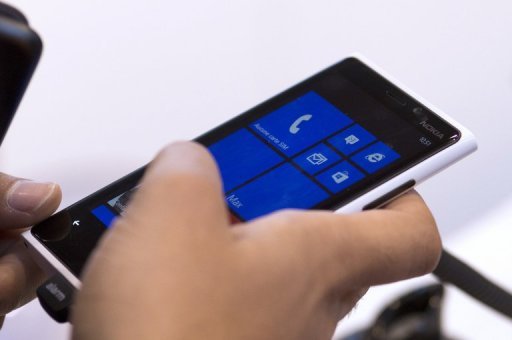 A man navigates with Windows 8 on a Nokia Phone on November 14, 2012, in Paris. Windows-powered smartphones made strong gains in the US market in early 2013, capturing third place, with Android and Apple at the top, a survey showed Monday. -AFP photo

Windows-powered smartphones made strong gains in the US market in early 2013, capturing third place, with Android and Apple at the top, a survey showed Monday.

Android, the free operating system from Google, remained the top platform with 51.7 percent of US sales in the three months to April, up from 50.3 percent a year earlier, according to Kantar Worldpanel ComTech.

Apple’s iOS was second with 41.4 percent, up from 39.1 percent a year earlier, the survey found.

The gains for the three platforms came at the expense of BlackBerry, which had a minuscule 0.7 percent of US sales compared with 5.3 percent a year ago.

The Canadian firm unveiled its BlackBerry 10 platform earlier this year, but the handsets have been rolling out gradually.

The survey found some positive signs for Windows, which is capturing customers upgrading from feature phones and from Android devices.

“It’s not just about capturing the market that is yet to upgrade,” said Kantar’s Mary-Ann Parlatto.

“When looking at those who changed device, between 2011 and 2012 Windows was more successful at capturing older consumers aged 50-64. But when looking at those changing now and in the last year, we’re seeing Windows now gaining share among those aged 25-34.”

Other surveys have shown gains for Windows smartphones, which appear to be pushing BlackBerry to fourth place in the US market.

Android had a commanding 75 percent global market share in the first quarter, according to research firm IDC. -AFP