Tuesday, February 7
You are at:Home»News»Nation»Michelle Yeoh is first iM4U mentor
For the freshest news, join The Borneo Post's Telegram Channel and The Borneo Post on Newswav. 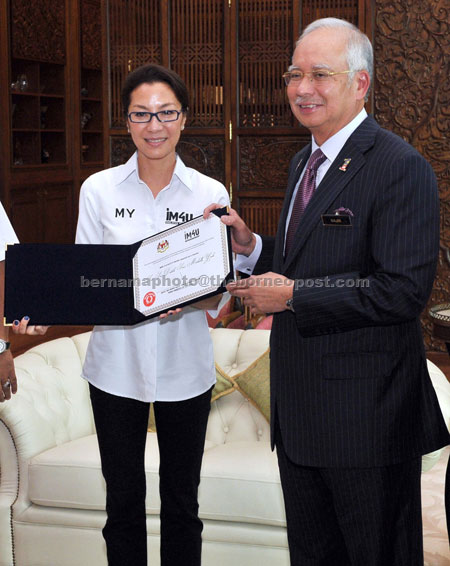 iM4U is the brainchild of Najib, who is also chairman of iM4U’s Board of Trustees for Malaysian youth to carry out volunteer and nation-building activities which can benefit communities and social groups.

The iM4U mentorship is to recognise the achievements of outstanding Malaysians who have contributed towards nation-building and are role models to the youth.

As iM4U mentor, Yeoh’s first initiative is to work with iM4U to develop a campaign to fight crime where the campaign will focus on areas where women are particularly vulnerable, such as car parks, areas near LRT stations and bus stops.

“I was very distraught when I heard about women, particularly traumatised in the car parks by snatch thieves. We are going to design ways to raise awareness to make Malaysia safer. Once we have the campaign in place, we will announce it,” she told reporters here today.

Yeoh, who is also Global Ambassador for the Make Roads Safe coordinated by the International Automobile Federation (FIA) Foundation for the Automobile and Society, said road safety was something close to her heart.

“I campaign around the world for road safety but there is something I want to do more.

“I spoke with the prime minister and he said there were 6,000 people dying of road accidents yearly. One death is not on its own as it triggers an effect. If he was a breadwinner of the family or a young child, that is an immediate loss to great future,” she said.

On her appointment as iM4U mentor, Yeoh said it was her honour to contribute to the country.

“He (prime minister) thanked me for being the first iM4U mentor. I told him it was my honour. I have always wanted to come back to do more…I will be back to do more. Malaysia is much respected outside our country and I want the world to see what a beautiful country I have.

“Next year, we have Visit Malaysia Year and youth can help tremendously and make it more exciting for people who visit our country and I want them to feel safe, relax and have a good time,” she said, adding that it was important to cultivate the spirit of volunteerism among youths.

Meanwhile, Yeoh confirmed that she would be filming in the movie, ‘Crouching Tiger, Hidden Dragon 2’.

“I’m pushing as hard as I can to film it at Pinewood Iskandar Malaysia Studios,” she said. — BERNAMA