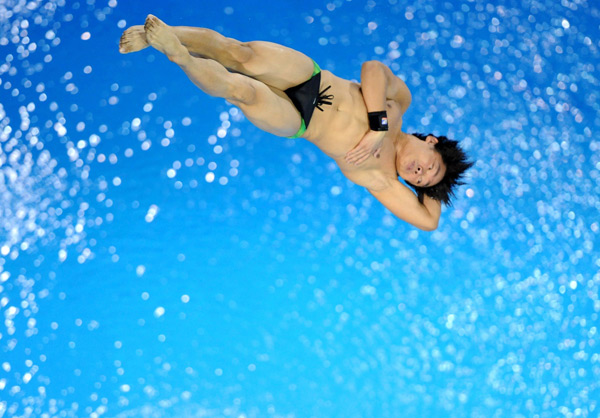 LEAVING IT ALL: Bryan performs during the preliminary round of the men’s 10m platform diving at the 16th Asian Games in Guangzhou in this November 26, 2010 file photo. — AFP photo

KUCHING: Malaysia’s No.1 male diver and three-time Olympian, Bryan Nickson Lomas, has officially tendered his resignation from the national squad in order to complete his studies at University Malaya (UM).

According to him, the National Sports Council (MSN) had accepted his resignation and respected his wish to concentrate fully on the studies.

“I have officially quit from the programme…I have tendered my resignation letter to MSN two weeks ago and they have accepted it,” the 23-year-old sports science undergraduate told The Borneo Post yesterday.

“They (MSN) said that I can still come back to join them later and that the door is still open for me,” he said in a telephone interview.

Bryan was Malaysia’s youngest athlete to qualify for the 2004 Athens Olympic Games when he was just 14.

He also competed in the 2008 Beijing Olympics and the most recent 2012 London Olympics.

In 2004, he created diving history for being the first Malaysian male diver to ever bag the 3m springboard title at the World Junior Championships in Brazil.

It was not just the first time Malaysia had won a World Cup medal in diving, but Bryan and Huang had also secured the first ever Olympic quota spot in synchro diving for Malaysia in the 2012 Games.

“At the moment my studies come first and I must complete it with flying colours…hopefully I can complete it by 2015,” said Bryan.

“I have not extended a copy of my resignation letter to the state sports council (MSNS) because the MSN should have notified them too on the matter,” Bryan said.

According to him, the only thing that he had to sort out now is the scholarship from the Ministry of Higher Education (KPT) which had enabled him to pursue his studies at UM.

“I will have to sort it out with KPT on my scholarship because I got it when I was with the national squad and hopefully it can still be continued even though I am no more with them,” he said.

Bryan, who will turn 23 on June 30, aspires to become a diving coach some day.

He will be entering his second year of studies next month but he still needs to pass his first year final examinations on next Monday.

“To me education is very important right now and I hope to complete my studies by 2015…hopefully there is nothing that will prevent me from doing so,” he said.