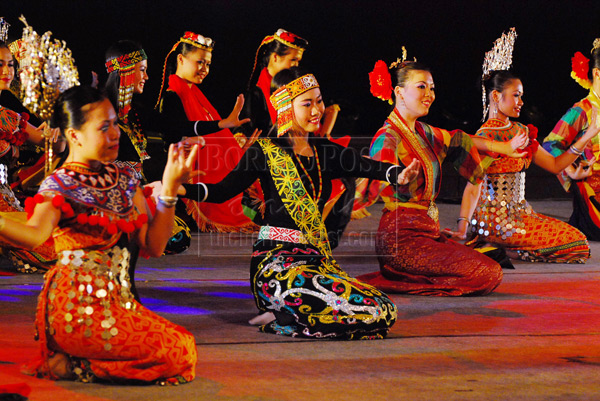 BEAUTY IN DIVERSITY: Dancers in different ethnic costumes performing a traditional dance in this file photo.

SIBU: The popular Borneo Cultural Festival (BCF) is more than just a tourism product as it creates a platform for the younger generation to learn and preserve the various local cultures and traditions under one roof.

Sibu Municipal Council (SMC) deputy chairman Daniel Ngieng who stated this yesterday, pointed out that BCF showcases performing arts and food among others, to the people so that these treasures would not be lost amidst the rapid pace of modernisation.

“It is an ideal platform for the people, especially the youths to converge and appreciate the local traditions expressed through performing arts on stage and food,” Ngieng said of the community-based event.

The event which is into its 11th year, will be held from June 28 till July 7. He noted that BCF is the major item in the local calendar of events.

Asked if it could lure overseas tourists, he said BCF is an excellent avenue for those keen to learn about the culture of the various ethnic groups. On whether this BCF would be grander than previous ones, he said they will do their level best with whatever resources they have.

Asked on the projected crowd to throng the town’s largest event, he said this was difficult to quantify.

“You see, this is a community-based event where people would bring their families and friends to converge at the location,” he noted.

Meanwhile, during the press conference last month, Ngieng said the council would maintain the ‘beauty in diversity’ theme for the upcoming BCF 2013.

He added Chinese, Malay/Melanau, and Dayak will have stage performances on the first seven nights at their own stage.

“The grand event would be from July 5 to 7, at the newly renovated main stage at Townsquare Phase 1,” he said.

Meanwhile, the fishtail banners on BCF can be easily sighted around the town, sprucing up the mood.