Friday, February 3
You are at:Home»News»Sarawak»Blind musician’s new house at resettlement scheme showing cracks
For the freshest news, join The Borneo Post's Telegram Channel and The Borneo Post on Newswav. 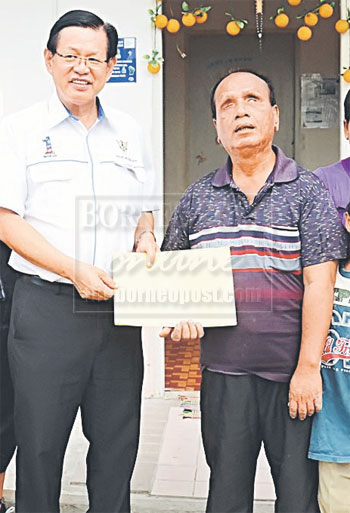 REQUEST FOR WELFARE: Jackson hands over the welfare application letter to Lee.

MIRI: A new house, belonging to Jackson Mangai at Tudan Phase 6 resettlement scheme built under the government’s housing assistance programme for the poor and needy, has structural problems with cracks beginning to appear.

Jackson, who is blind and earns a living as a street musician, moved in the house in January after the house was completed on Dec 23 last year.

“My family tells me there are cracks on the walls and the right side of the front part of the house is sinking, making the area there uneven,” he complained to Assistant Minister of Communications, Datuk Lee Kim Shin who visited the house on Friday.

Lee, who is also the Senadin assemblyman, assessed the situation and immediately called Miri District Officer Boniface Intang Apat to notify him of the problems faced by Jackson.

He asked Boniface to contact the project contractor to rectify the problems.

On a positive note, Lee was happy to see Jackson’s wife had taken the initiative to grow vegetables in the compound, which she said were for sale and also for their own consumption.

He commended the effort, which is generating extra income for the family and at the same time helping to reduce household expenses on food, and encouraged other families to do likewise.

The wife requested for fertiliser and seedling assistance, to which Lee directed his men to follow up with the agriculture department.

According to Jackson, the new house  was allocated to him about two years ago. “The old house was just next to this new one and it was built with zinc sheets,” he added.

Jackson was among the five hardcore poor in the resettlement provided with the housing assistance scheme where the houses cost RM50,000 each to build.

He thanked the government for the piece of land and a comfortable home for him and his family.