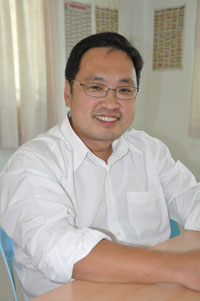 He succeeds Wong Ho Leng who did not seek re-election during the 16th DAP Sarawak Ordinary Convention here yesterday for health reasons.

Alan Ling succeeds Chong as secretary and he will be assisted by Yap Hoi Liong. The treasurer’s post went to Dr Wong Hua Seh.

The term of the new committee is two years and will expire on 2015.

On the committee’s immediate task, Chong said they would consolidate those areas which the party won during the state election in 2011 and the 13th general election.

“We would also come up with plans to make inroad in rural areas. For that purpose, we have set up a Rural Development sub-committee headed by Chiew Chiu Sing. He will be assisted by Leon Jimat Donald, Dr John Brian Anthony and Dr Bob Baru Langub.”

Chong said the sub-committee would submit a thorough plan to make inroads in the rural areas within two weeks.

He described the party’s rural drive as an uphill task due to machinery and financial constraints.

“What we have are political will and ideology. We believe that we can improve the lives of the rural folk and improve our country by bringing change to the rural areas.”

Chong clarified that the Dayak Consultative Council would still be playing its role despite the formation of the Rural Development Sub-Committee.

Asked if Ho Leng would be appointed state DAP advisor, Chong said Ho Leng preferred to take a rest as he had made it very clear in his speech that he wanted to retire from active politics.

One of the highlights of the convention was a motion thanking Ho Leng for his contributions to the party as state chairman and member.