Saturday, October 1
You are at:Home»News»Nation»Commission appoints eight to task force to probe deaths 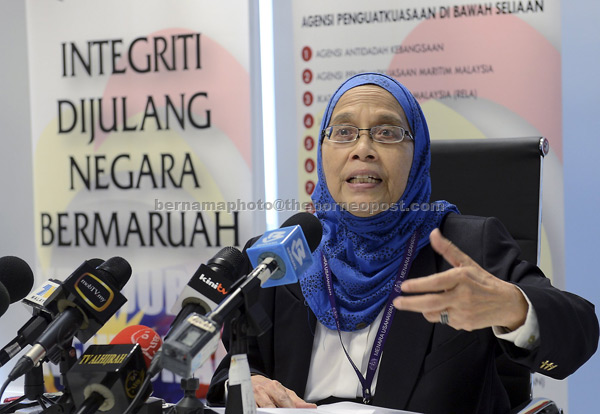 PROBE ON SOP: Heliliah announces the appointment of eight people to sit on a special task force to probe two cases of custodial death. — Bernama photo

PUTRAJAYA: The Enforcement Agency Integrity Commission yesterday announced the appointment of eight people to sit on a special task force to investigate the standard operating procedures (SOPs) in two cases of custodial death.

Commission chairman Datuk Helilah Mohd Yusof said the task force was headed by herself and commissioner Datuk Seri Jacob Ridu while the director of the operations division, Ahmad Mohd Sidek, was the secretary.

She said three of the other members were the director of the policy, research and innovation division, Foon Hui Yi; the legal advisor, Eda Mazuin Abdul Rahman and an investigating officer, Mohd Nadzri Ibrahim.

“The two other people are former deputy inspector-general of police Tan Sri Mohd Jamil Johari and former president of the Malaysian Bar Council Lim Chee Wee. They were appointed to give their views based on their expertise and skills,” she told a news conference at her office.

Helilah said the task force would investigate the system at the lockup, from the time a person was detained until completion of investigation, to determine the factors that could contribute to death. Meanwhile, when contacted by Bernama, Inspector-General of Police Tan Sri Khalid Abu Bakar welcomed the setting up of the task force.

“I believe the task force can assist the police to improve the SOP, particularly relating to the safety of detainees,” he said. — Bernama