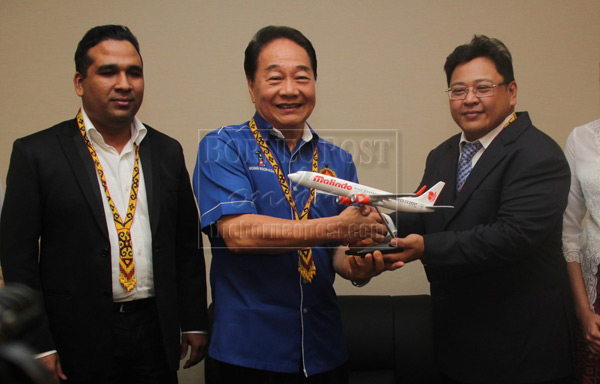 FOR REMEMBRANCE: Ed (right) presents a memento to Wong after the press conference while Chandran looks on. 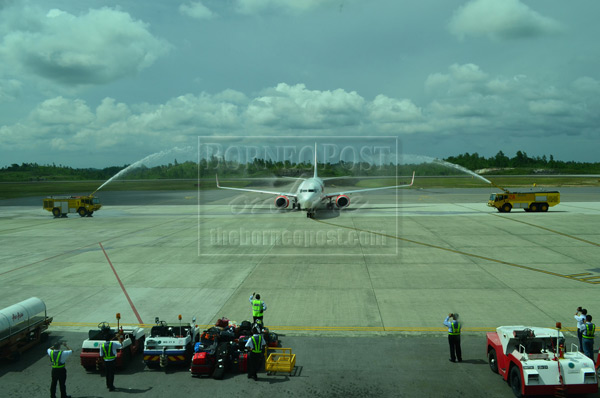 FIRST TIME EVER: The maiden landing of Malindo Air aircraft from Kuala Lumpur. 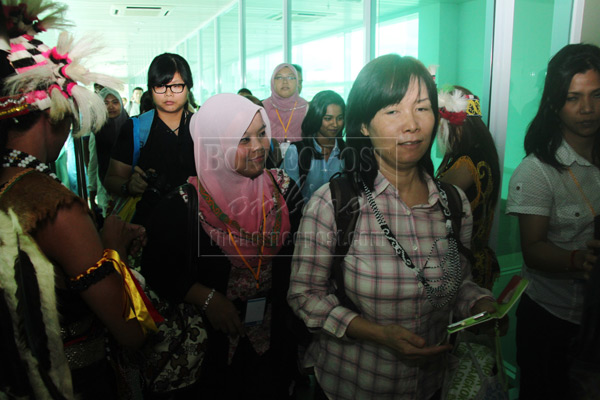 HISTORIC: The first passengers on board the maiden Malindo Air’s flight from Kuala Lumpur to Sibu.

Second Finance Minister and Minister of Local Government and Community Development Dato Sri Wong Soon Koh was on hand to welcome them.

Wong told a press conference later that connectivity was vital not just for tourism but for the community of Sibu, especially those involved in business.

He described the Malindo Air flight to Sibu as a historic moment and would open wider connectivity between the peninsula and east Malaysia.

“It will further boost tourism by linking Kuala Lumpur to Sibu and also benefit Sibu people, especially those in business, which requires them to travel a lot,” he said.

He also said Sibu has lots to offer especially in culture as “there are 27 ethnic groups in Sarawak living harmoniously here while the other attractions are boat cruises on the Rajang River and visits to Iban longhouse villages”.

Meanwhile, Chandran disclosed that Malindo Air targeted to have three daily flights on the Kuala Lumpur-Sibu-Kuala Lumpur route after Hari Raya, besides flying the Sibu-Kota Kinabalu route during the first quarter of next year.

“We’ll need more aircrafts. A total of 10 aircrafts would be delivered by September,” he added.

He also said Malindo Air is working very closely with Sarawak Tourism Board to create new products as Sarawak has many new things to offer especially in Sibu, Miri, and Kuching.

“China and India have huge populations, and when we give them new products they are potential tourists to Malaysia,” he pointed out.

All Boeing 737-900ER crafts are installed with in-flight entertainment system which offers the latest Hollywood blockbusters and Asian movies as well as games.

He said the economy class has a seat pitch of 32 inches while the business class has 45 inches.

Free snacks are provided on board and every guest gets 20kg complimentary baggage allowance in economy class and 30kg in business class.

“Our objective is to give a good and superior product at affordable low fares,” he said.