Tuesday, August 9
You are at:Home»Sports»Watersports»KRP Junior swimming meet this weekend 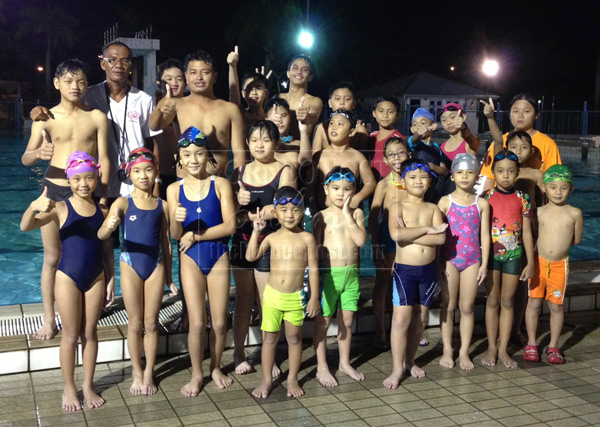 IN HIGH SPIRIT: KRP coach, Mohd Faizal (back row – second left) together with club’s officials and swimmers posing for a group photograph after training for the inaugural KRP Junior swimming invitational meet to be held this Saturday.

MIRI: Kelab Rekreasi Petroleum (KRP) will be organising its inaugural KRP Junior swimming invitational meet this Saturday at the club’s pool in Lutong.

KRP coach, Mohd Faizal @ Thomas Abdullah said 118 swimmers from six teams will be competing in the event and the club is sending the most with 51 participants.

They will compete in 94 events including the team relay.

“Our target is to be the champion with the most medal collection. As a preparation to achieve the goal and other competitions we continuously train our swimmers,” Faizal told The Borneo Post yesterday.

He added “Neverthless for state-level swimmers like Fatin Farahanim…we limit their events to two individuals and one relay team event, to give other swimmers to compete and win medals.”

Former political secretary to the Minister of Energy, Green Technology and Water, Datuk Sebastian Ting who is also the Piasau SUPP Chairman, will officiate at the opening of the championship at around 8.30 am.

Faizal added that championship was part of their efforts to develop and popularise the sport to as many people as possible.

It is also to enhance closer rapport among the athletes, coaches and their parents as well as to promote KRP to the locals, that they too could help ensure the success of whatever sporting activities organised.

He said apart from championship KRP is also organising swimming lessons and those interested can contact the club manager, Unyat Dollah and his officials, Dayang Hazelina and Johanna Edward.

Meanwhile, GCM is sending 25 swimmers to the meet and the club’s coach, David Chung said his assistant, Allister Chung together with team manager, Candy Ting will be accompanying the team to the meet where 118 swimmers from six teams are competing.

“GCM is hoping to win as many medals as possible in the championship, although our swimmers are very young swimmers age 4 to 6 years,” he said.