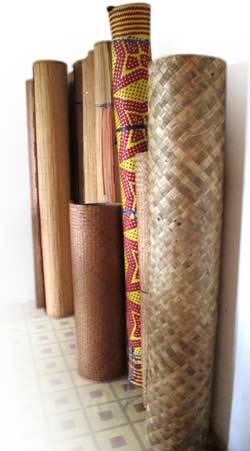 IBAN basket and mat weavers are facing a fast depleting supply of rattan, the slender but strong and pliable jungle palm or reed that is indispensible to their craft.

Rattan’s increasing rarity can be attributed to poor logging practices, forest fires and opening up of plantation estates.

Like many equatorial flora, rattan is a sensitive plant. For it to thrive, plenty of space and growing conditions such as the right amount of sunshine and rain are essential.

Rattan collectors and makers of rattan baskets and mats in Sarawak believe something has to be done before the ‘rattan culture’ becomes history like in many other parts of Southeast Asia.

A Penan weaver in Limbang laments she and her sisters have to now resort to using plastic materials for making basketry items.

A retired headmaster whose wife is a basket weaver, is also hoping rattan can be cultivated profitably through research – and development of rattan plantations.

This underscores the importance of rattan as the quinessential material for making baskets and mats among the longhouse Iban womenfolk.

The headmaster also called for basketry to be incorporated into the syllabus of rural primary schools.

Lending credence to the call, a researcher, who recently visited the Heritage Handicraft Centre of Miri, observed that in recent years, there had been a global revival in the study of traditional basketry techniques and designs.

Although rattan is harder to come by these days, an Iban housewife, Pantan, who is one of the best basket weavers of Rumah Aling (Ulu Limbang) still goes into the jungle from time to time to look for the material.

Harvesting rattan means her body will be exposed to cuts by thorns and her legs to hurt by tough twines.

In the past, she even had close encounters with snakes.

Sometimes, Pantan goes into the jungle alone but usually, her elderly husband, daughter-in-law and cousin accompany her.

Pantan, who is 60 plus, strongly discourages loss of man hours, believing if too many people go in search of rattan in the jungle, much valuable household work will be left undone.

Her own longhouse is nestled in idyllic surroundings where cockerels flap their wings and crow to welcome the break of dawn. 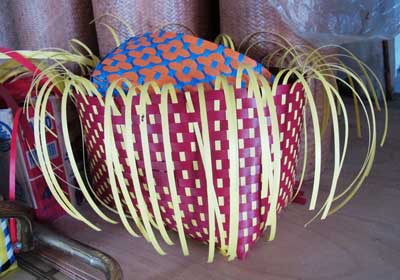 EYE-CATCHING: An attractive basket made of plastic ribbons.

Birds join in the chorus of Nature’s feathered choir with cheery chirpings while early morning dew washes the jungle canopy and mist drifts low on the hills.

Smoke from woodfire wafts from the roofs of kitchens in the longhouse and in the silence of the early morning, the sounds of crockery being washed and pails being dragged along the concrete floor can be heard.

Typically, Pantan, like all Iban longhouse women, rises as early as 4am to cook two meals – breakfast and lunch – to bring to the farm.

While waiting for the rice to cook over the woodfire, she would take out her yet to be completed basket or mat and add to them a few more rows of weaving.

Pantan has four children – Robert, Juat, Anthony and Lily – and 14 grandchildren. She lives in the longhouse with her daughter-in-law and two grandchildren who go to a nearby school.

All her children are working and living elsewhere – Robert and Juat have jobs in Kuala Lumpur. Anthony, the youngest, works as a tractor driver in Papua New Guinea while Lily is a housewife living in Miri.

Like other Iban housewives, Pantan is on her feet all day, doing household chores and looking after her grand children, if not walking several kilometres to work in her farm – sometimes not even resting on Sundays.

When she returns from the field, she and her daughter- in-law will cook the evening meal. After that, before she sleeps, she would sit beside a dim light to work on her baskets and mats. 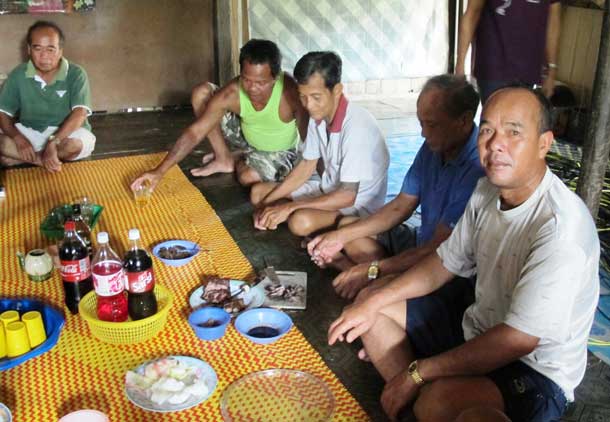 PRACTICAL: Guests sit down for a meal around a good and bright plastic mat.

Pantan has an keen eye for detailed designs. Her products, of which the most well-known is tikar lampit, are greatly admired by people who know her.

According to her, to make baskets or mats, the rattan is trimmed first, then skinned. Sometimes, it is soaked in water. Splicing is done with knives of different sizes.

Pantan has been making rattan baskets and mats most of her life that the whole process is second nature to her. She only has to see a pattern once to come with an exact replica.

Her cousin, Selin, who is also a grandmother of several grandchildren, does not work in the farm but concentrates on making baskets and mats not from rattan but plastic materials bought in the kedai (shop).

One roll of plastic ribbon or weaving material now costs around RM120 in Limbang. Previously, most Iban women bought only small left-over strips but Selin prefers the whole roll.

She chooses her colours carefully as her customers often ask for different combinations of colours and designs.

So far, her business is thriving. Some of her products are selling for over RM200 apiece. Sometimes, friends introduce West Malaysian visitors to her ready-made items.

More and more women are taking up basketry in the longhouse. They will sell their products at the Limbang Tamu – mostly to Sabahans and Bruneians.

Another mat material is bemban (water weed) which is harder to process.

It is only when Pantan is not working at the farm that she finds time to make bemban mats which can be beautifully designed and make great gifts for children.

The mats are also “very cooling” as a cover for new-born babies.

Pantan said bemban mats which could be washed and dried in the sun, were ‘very hygienic’ to use in the living room or bedroom for babies to crawl on.

Even the Chinese in town admire bemban mats and often pay a good price for them. A small piece frequently fetches RM100 – that is if the weaver is willing to sell.

Iban basketry designs are usually geometrical for utilitarian use. The fern motifs can be intricately fashioned by fine finger-works like those produced by Pantan.

Sometimes, the baskets are so well made that they are used as decoratives and conversation pieces rather than for everyday household use.

Once while visiting her sister in Sri Aman, Pantan came across new designs and immediately replicated them on paper.

On her return to Limbang, she used the new designs to make baskets – with improved handles.

Pantan radiates enthusiasm for her handiworks. She believes anyone willing to learn can become a good craftswoman.

An Iban woman skilled in basketry is highly respected by the community. This is the kind of legacy older Iban weavers should leave behind to perpetuate a highly elegant (and exclusive) artform.

They must not leave just baskets and mats behind but their time-honed skills to the younger generation as well.

Such life skills will add great pride to their rich heritage and culture and should be passed down from generation to generation.

But are the days of the basket and mat weavers numbered in the face of acute rattan shortage?

The writings are on the wall and hopefully they will not go unnoticed.

Besides rattan and plastic, almost all the longhouse womenfolk make mats from the rough keropok, a weed with very tough natural fibre, which can be found in the wild or grown near the longhouse.

As keropok is a very light and free material, many weavers from Rumah Asing can make baskets and mats very quickly with it in their spare time and sell them at the tamu.

Once the keropok is trimmed, refined, dried and processed, it can be made into a mat in a day or two. 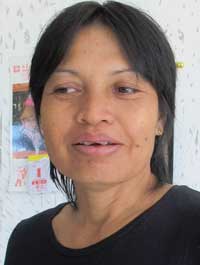 MAT WEAVER: Mrs Dato can weave a mat within three months. She will not make much money from her items because the production cost is high.

Cash can be brought in quite easily in this way and it will go to paying for sugar, salt and cooking oil, according to a weaver known as Mrs Datu.

She added that keropok mats were mostly for personal or family use.

Keropok is useful for another purpose – making attap (quite like the nipah variety) which can be used as a temporary room divider.

Because of its light weight, it’s often used by boatmen as roof covers for their boats for the long river journey up the ulu or down to the hilir.

Keropok is also used to make temporary roofs and covers for make-shift shelters at timber camps.

Mats made from this material are one of the most disposable items produced by the Ibans.

According to Pantan, keropok is easily found in the Limbang valley. And to her, it is a valuable gift from God. Very often, she makes keropok mats to protect her linoleum matting in her litchen.

Mats made from this material are warm to touch and nice to step on.