Wednesday, July 6
You are at:Home»Features»Stroll down Kai Joo Lane CHUEK HNG: This is the old signboard of a 90-year-old shop offering fresh pineapple tarts. Its owner Noi Ng inherited the shop from her father and started a new business of making pineapple tarts 20 years old. Business has been flourishing since she made the bold change which her father objected in the beginning.

WHEN a shopowner at a narrow out-of-the-way street in Kuching received an order for 10 tubs of pineapple tarts from the Prime Minister’s office, she was surprised — pleasantly but not completely.

For after all, customers the world over have dropped by her simple shop at Kai Joo Lane, a partially hidden stretch of street, situated at a remote corner in the old sector of Kuching City, to buy her pineapple tarts, shaped like mini sunflowers in full bloom.

What in-coming customers might not know though is that Kai Joo Lane where Noi Ng, 48, sells her pineapple tarts at her shop — Chuek Hng – has been in existence for the past 90 years.

Indeed, the shop and its location should be appreciated for its historical heritage and value as much as the pineapple tarts sold there for their palate-pleasing taste.

Anecdotally, Brooke was so close to Kai Joo that he would from time to time look the latter up for a chat in his shop at Channel Road. Despite the royal sanction, Kai Joo lane was back then still commonly known by its other name – sa lee hung which literally means lane of zinc sheets in Teochew or Hokkien.

That was just natural because when first built by Teo, the 32 shops along Kai Joo Lane were made of red-brown bricks with zinc sheet roofings. Some of the buildings were later white-washed but what remained distinctive was the zinc roofings – thus, the name sar lee hung. RELICS: Most objects in the coffeeshop of Tan Mui Kim, 62 are relics, including a flower vase, two pictures and an egg basket. Tan inherited the coffeeshop from her father.

With the passage of time, a few shops along Kai Joo Lane started the business of making coffins. Soon, sar lee hung was forgotten and replaced by a new name — The Coffin Lane (kua ca hung). This narrow street branching out from India Street stuck with the new name until all the coffin shops closed down.

And it was only after 2000 that the street started to be known as what it should be — Kai Joo Lane.

On June 2 this year, the Kai Joo Lane business community celebrated the 90th anniversary of the naming of the street by Charles Brooke, not only to remind themselves of having the privilege to do business at a historical site but also the Kuching community of its historical value.

In fact, Kai Joo Lane should not be only known for its pineapple tarts and cha siu pastry of Chong Chon Bakery but also for what it actually is — an old street that has weathered the economic ups and downs of the city over the years as well as the competition from other business centres in Kuching and through them all, still continues to remain relevant even amidst on-going city restructuring and modernisation. OVERTAKEN: Competition and development have overtaken some shops along Kai Joo Lane.

To Datuk Wee Hong Seng, chairman of India Street Pedestrian Mall Community Association (ISPMCA), all business operators along the 160-year-old India Street and the lanes branching out of it such as Kai Joo Lane, Ban Hock Lane and Jalan Court House, should try to be creative and innovative in order to sustain their businesses.

As part of the old wet market, the area used to be the hup of business activities. Even now, it is still sits at the heart of Kuching.

However, traffic jam has been a major stumbling block and many customers are trying to avoid the area, preferring other places where parking spaces are easily available and the traffic considerably less congested.

Wee who owns a textle shop along India Street, understands the problems the business operators there are facing.

He said the problems could be solved, given the time, communal efforts, an open mind and a positive outlook.

He believed that gone were the days when businessmen could afford to care only about the little shops they owned.

“As business operators of a definite locality, we have formed an association through which to voice out our problems and solve them through discussions with the authorities and the other community associations in the vincinity,” Wee told thesundaypost.

In Kuching alone, there are at least 30 business community associations. 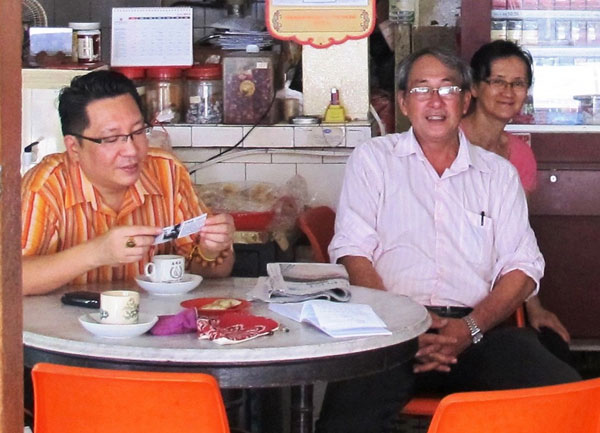 DOWN MEMORY LANE: Tan Mui Kim, 62, (right) inherited the coffeeshop from her father and continues to operate it as it was first handed down to her.

As head of India Street Pedestrian Mall Community Association (ISPMCA)Datuk Wee Hong Seng said his main problem was not being to speed up progress in the area as some of the resident businessmen were reluctant to attend meetings to make decisions but quick to object to the decisions after they were made.

“ISPMCA meetings are the avenue for them to have dialogues with the authorities and voice out the problems affecting their community. They should make it a point to attend” said Wee, who is also chairman of the Kuching City Centre Consultative & Coordinating Committee now looking into traffic problems in the area.

Citing the recent opening of Plaza Merdeka, he said ISPMCA had welcomed the new shopping mall with open arms rather than resentment from fear of competition, adding that they were fully informed of the Plaza’s work progess and the benefits it would bring to the association.

There are 72 members under ISPMCA, including business operators and shopowners along India Street Pedestrian Mall Community Association, Kai Joo Lane, Jalan Court House and Ban Hock Lane. Plaza Merdeka has been invited to be a partner of ISPMCA. 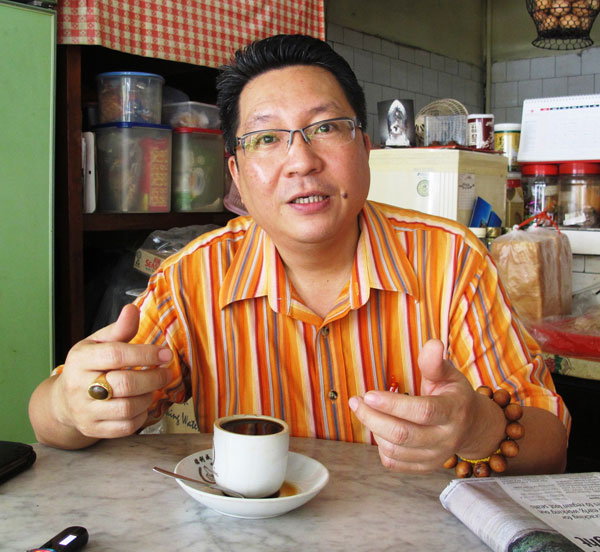 “Development cannot be stopped. One either has to see it as an opportunity and embrace it or reject it at one’s own peril,” Wee said.

He believed to compete with the mushrooming of shopping malls in Kuching, the area within the perimeter of India Street Pedestrian Mall Community Association, Kai Joo Lane, Jalan Court House and Ban Hock Lane needed a modern shopping complex to complement its further development.

“Our businesses are situated at a site of historical significance – that’s edge we have over other shopping areas. The historical background is an added value that makes the site more than just a mere street or lane in Kuching. In that sense, we complement Plaza Merdeka.

“All this while, the in-flow of tourists never decreases. What we need is to attract more local customers. With the opening of Plaza Merdeka and its spacious parking lot, customers are now coming in not only from Kuching Waterfront side but also Plaza Merdeka side,” Wee noted. 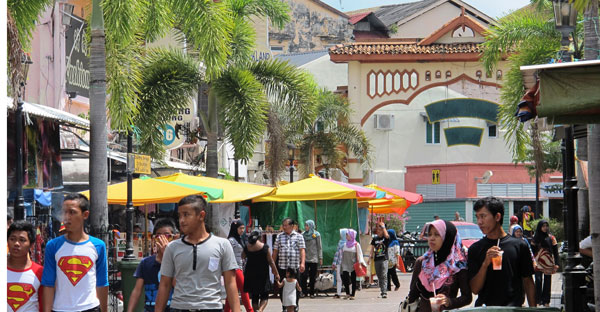 INDIA STREET: The 160-year-old India Street was given a facelift in 1990 when it lost many regular customers. Business started picking up after the project through intense publicity.

Since the opening of Plaza Merdeka, business in the area has been picking up by 15 to 20 per cent compared to two to three years ago. Businessmen find themselves in a secured position again as the area is moving towards regaining its past glory.

Not every shop along Kai Joo Lane is thriving like Chuek Hng and Chong Chon Pastry. There are many which have been closed and many more surviving without making themselves known to the Kuching community.

Vibrant businesses or activities are vital for these old streets and historical trading places if they are to continue as tourist attractions.

No tourists will want to visit a ghost town with closed shops and without people. As such, the authorities are trying to make the place more presentable.

On that note, business operators in the area should perhaps reciprocate by changing with the times — or they should create try to niche products so that their businesses will not only survive but, more importantly, thrive and flourish.

With the area pulling in the crowd, the government will see the need to constantly upgrade facilities to make the area a vibrant tourist and shopping locale. 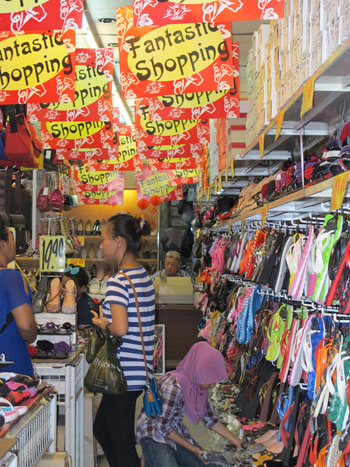 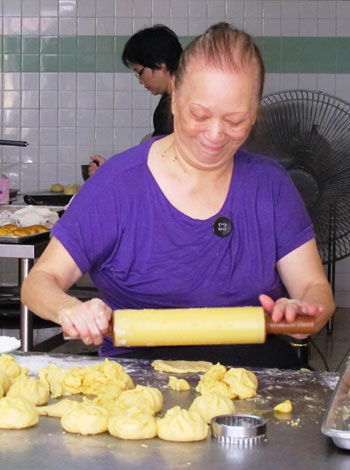 LOCAL DELICACY: Apart from pineapple tarts, cha siu pastry of Kai Joo Lane is also a popluar item that gets sold out before 1pm. 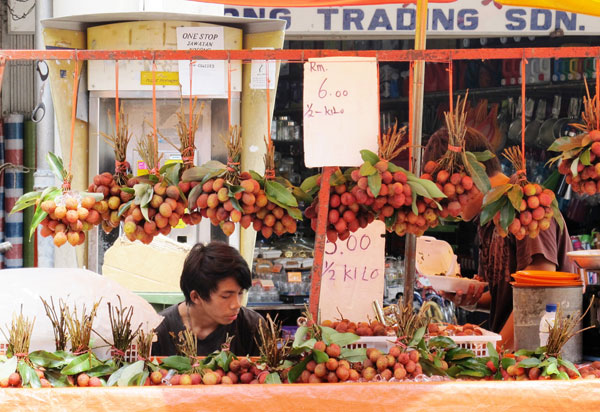 INDIA STREET MARKET: Due to the confluence of in-flow customers, an open air market is slowly coming up along India Street Pedestrian Mall and will soon be covered with roof to make shopping more comfortable.