Monday, December 5
You are at:Home» 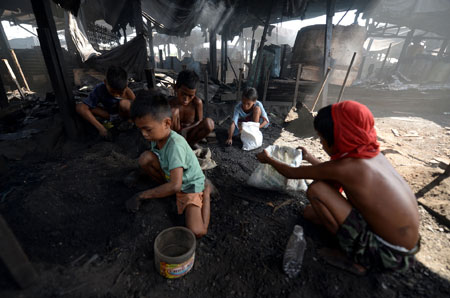 MAKING A LIVING: File photo shows children collecting rusted nails from the burnt woods at an unregulated charcoal factory locally known as “Ulingan” in the slums of Manila. Yet that has done little to change a huge rich-poor divide that sees roughly a quarter of Manila’s 12 million people surviving on a dollar a day or less. — AFP photo

MANILA: A sinewy man covered in thick soot stands in a grey cloud of smoke, watching over a slow-burning pile of wood that sustains his life but may also eventually kill him.

Nearby, emaciated children with their bones visible through their skin bet over a game of dice using charcoal instead of money.

More than 1,500 people live in this makeshift charcoal factory in one of the sprawling slums that dominate large chunks of the Philippine capital of Manila.

They mine a neighbouring garbage dump for scraps of wood, which they place into crude furnaces.

After a week the charcoal is placed into sacks and hauled off to market.

While the country’s rich enjoy electricity and gas delivered into their homes, charcoal remains a vital source of fuel for the poor masses.

The Philippines, for decades one of the Asia’s economic laggards, has attracted global attention for remarkable growth since President Benigno Aquino came to power in 2010.

The stock market has hit record highs, credit agencies have upgraded the country’s risk ratings and new skyrises are being built with speed reminiscent of China’s construction boom.

Yet that has done little to change a huge rich-poor divide that sees roughly a quarter of Manila’s 12 million people surviving on a dollar a day or less.

Nowhere can the chasm be felt as deeply as Ulingan, the squatter community whose residents make their living from charcoal.

Among them is 34-year-old Rose Mingote, whose creases in her tired face are filled with black powder after a night of filling sacks.

“I am not sure if I can bring a child into this kind of world. This is as good as it gets for me,” says Mingote, who has been married for four years.

On a nearby broken bench that alternates as a sleeping space, a mother and her three children share a single plate of rice.

The youngest of the three stares blankly into the distance, with only a ripped tarpaulin providing shade.

Everyone is forced to inhale the smoke that billows from the charcoal pits, turning the dire landscape into an eerie monochrome.

Those who toil here risk contracting a range of health problems, from respiratory illness to skin disease.

Project Pearls has helped some of the slum dwellers relocate, but most are reluctant to go.

Despite the daily torture, making charcoal can return up to 2,000 pesos (US$50) a week, providing a better existence than for many others in the slums.

“To everyone else, this is dirty, but to poor people like me, it’s our source of life,” says mother-of-three Madelyn Rosales, 33.

“We’ve had different jobs and different homes but it’s only through working here that my children have been able to taste meat and hotdogs.”