Monday, January 30
You are at:Home»Business»Thailand’s boom to the northeast, the spoils
For the freshest news, join The Borneo Post's Telegram Channel and The Borneo Post on Newswav. 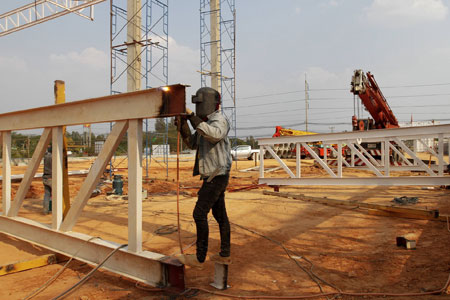 GRIP OF A BOOM: A worker welds girders at the 168 Platinum mall construction site in Udon Thani in northeastern Thailand. The malls, factories and construction sites in Thailand’s northeast are emerging alongside its farms as a potent economic fuel in one of Asia’s top emerging markets. Growth in Thailand, Southeast Asia’s second-biggest economy, has begun to slow, but the economy of the northeast is in the grip of a boom. — Reuters photo

UDON THANI, Thailand: Steel girders jut from the low skyline of the Thai city of Udon Thani near the Laos border as workers lay cement for a new shopping mall, one of many illustrating a boom in the Thai economy beyond the bright lights of Bangkok.

The malls, factories and construction sites in Thailand’s northeast are emerging alongside its farms as a potent economic fuel in one of Asia’s top emerging markets. Growth in Thailand, Southeast Asia’s second-biggest economy, has begun to slow, but the economy of the northeast is in the grip of a boom.

The economic renaissance of “Isaan”, Thailand’s poorest and most populous region, has coincided with expansionary policies – from wage increases to farm subsidies – that are enriching an area at the heart of a ‘red shirt’ protest movement that backed Prime Minister Yingluck Shinawatra in a 2011 election.

“There is a macroeconomic ramping up of the northeast,” he said.

The potential may never be realised if a crucial 2.2 trillion baht (US$71 billion) infrastructure programme becomes a casualty of the feuding between Yingluck’s ruling Puea Thai Party and its opponents.

But if the plan went ahead, as is generally expected, it would change the entire economic structure of the northeast, said Rahul Bajoria, an economist at Barclays Capital.

“It’s the next entry point for investors and consumers – if they link it up to China, it becomes the entry point to Thailand, not Bangkok,” he said.

“But it’s been difficult for the bureaucracy to execute programmes because they don’t know who will be in power in a year or two.”

Economic growth in the region reached 40 per cent from 2007 to 2011, against 23 per cent for the country and just 17 per cent for greater Bangkok.

Monthly household income rose 40 per cent between 2007 and 2011, the biggest jump of any Thai region. Interviews with businessmen and investment data suggest the trend is continuing.

The number of private investment projects in the northeast rose 49 per cent in 2012 from the previous year, with the total amount invested more than doubling to US$2.3 billion, according to the Bank of Thailand. Much of it is concentrated in property – from high-rise condominiums to town houses and shopping plazas.

“The northeast has a large population, a dense population, so the income is big,” said Naris Cheyklin, chief financial officer of Central Pattana Pcl, referring to the one-third of Thailand’s 68 million people who live there.

In April, Central Pattana opened a 2.75 billion baht (US$88.7 million) mall in Ubon Ratchathani, near the southern tip of Laos, their third in the region.

Politics explains part of what is going on. Yingluck’s government brought in a nationwide minimum wage of 300 baht (US$10) a day in January.

In some Isaan provinces, that was an increase of 35 per cent, among the biggest gains in the country, on top of a nationwide 40 per cent rise in April 2012.

Many workers, such as those building the 168 Platinum Mall in Udon Thani, are happy to return to the northeast for wages that are now on a par with Bangkok’s.

Isaan’s ‘red shirts’ are among the staunchest supporters of Yingluck’s brother, former prime minister Thaksin Shinawatra, who was ousted in a 2006 coup but influences policy from self-imposed exile in Dubai.

While in power from 2001, his populist policies – from virtually free healthcare to low-interest loans to the rural poor – made him a hero in Isaan.

The red shirts formed the core of a movement that paralysed Bangkok in April-May 2010 in protest at the government of then Prime Minister Abhisit Vejjajiva and the forces that ousted Thaksin – the traditional Bangkok elite including top generals, royal advisers, business leaders and old-money families.

Those protests were put down with force, but the red shirts got their revenge in the 2011 election and now see the rewards.

“A lot of the boom is upcountry, and that is politically driven, partly, because that’s where Thaksin’s supporters are,” said Wood at CLSA.

The poverty rate in Thailand fell to 13 per cent of the population in 2011 from 58 per cent in 1990, according to the World Bank, but per capita gross domestic product in Isaan in 2011 was still less than an eighth of that of Bangkok at US$1,600 a year, according to the state planning agency, the NESDB. —Reuters