Saturday, February 29
You are at:Home»News»Sarawak»Jitters over roadside trees 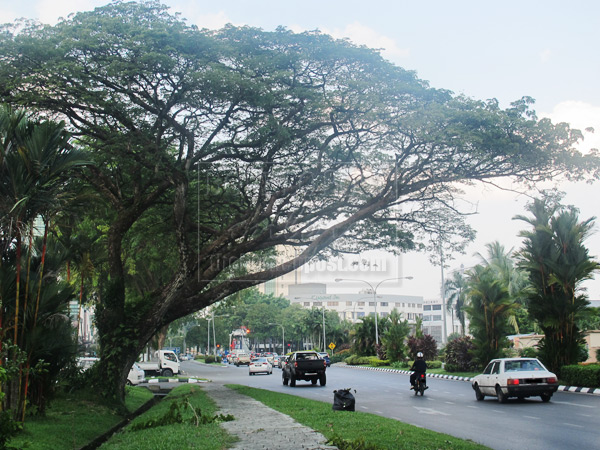 CONSTANT DANGER : A rain tree which leans over the road at Jalan Abang Abdul Rahim, a walking distance from the MBKS building, looks like a disaster waiting to happen. A Borneo Post reader says he always gets nervous driving past this tree especially during a storm.

KUCHING: The death of a man pierced by a branch of tree blown down by strong winds in Serian yesterday has sent ripples of alarm among people here.

Reacting to the incident and fears of road users, Padawan Municipal Council (MPP) chairman Lo Khere Chiang said in landscaping the areas under their jurisdiction local councils were fully aware of the danger trees might pose to passers-by especially during bad weather.

Kuching South City Hall (MBKS) Mayor Dato James Chan also expressed his concern over trees planted on the roadsides which beautify the city but could be dangerous to road users during storms.

Their fears are well founded as cases of falling trees or branches killing or injuring road users are not uncommon in the state.

Last May a delivery truck driver Yap Khoon Beng, 56, was killed in a thunderstorm by a failing branch which landed on his vehicle when he was driving near Masjid Jamek in Petra Jaya here.

“Since I became the mayor, I get worried whenever I see these trees along the roadsides. I have been asking council staff to
trim them, more often than necessary until I receive complaints that the trees are balding,” Chan told The Borneo Post yesterday.

“And so far, there has not been any unfortunate incidents happening within MBKS areas. We will continue to stay alert to make sure nothing happens,” said Chan.

Lo also holds the view that if the councils planted the trees along the roadsides, they should take full responsibility of making sure that they would not pose danger to road users.

“We trimmed our trees regularly. However, I admit that we have not done enough. I will bring up the matter in our
standing committee meeting to come up with a more efficient routine of maintaining the trees.

“The public has been a good help to councils as they would call if they deemed some trees were a danger to road users and I encourage them to continue to do so,” said Lo.

On the complaint of a concerned motorist who called The Borneo Post yesterday to highlight the tall and dead trees along Jalan Puncak Borneo (opposite Kpg Sri Arjuna) at KM12, he said he would look into the problem immediately.

Taking the opportunity, Lo called on the public to be more considerate and make sure that the trees they planted in their compounds would not cause inconvenience or became a nuisance to their neighbours or the public.

“They are some good people who plant flowers, shrubs or fruit trees on road reserve and take care of them. However, they are also some who don’t and let them grow wild.

“Should that be the case, it would be better if they don’t do it at all because the unattended plants may be a nuisance and some even block traffic views,” said Lo.