Saturday, February 29
You are at:Home»News»Sarawak»Quick resettlement for fire victims 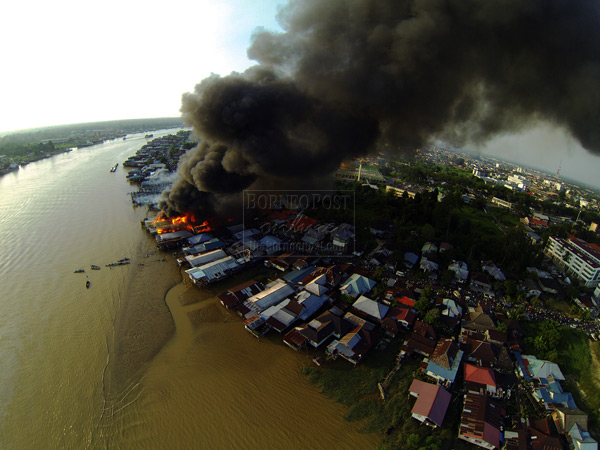 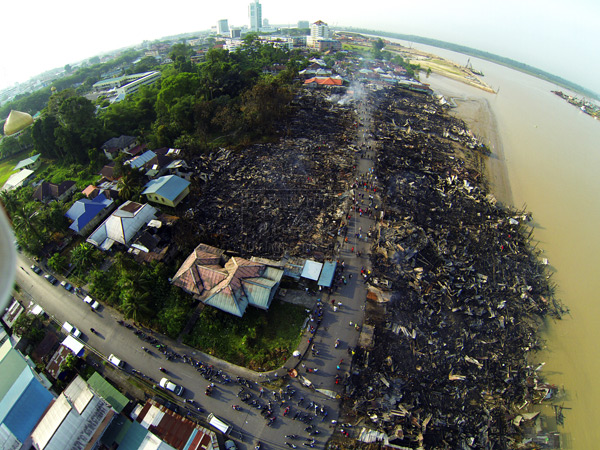 CATASTROPHIC: Aerial views of Kampung Datu and Kampung Hilir at the onset of the blaze and after the inferno. — Photos courtesy of Lau Chung Kyu 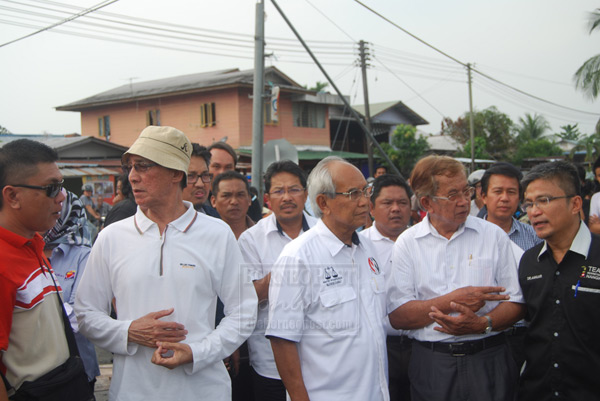 WE CARE: Jabu visits the fire site. At left is Hamid while Annuar is at right.

KUCHING: The state government will hasten the resettlement of families affected by the fire which razed more than 60 houses at Kampung Datu and Kampung Hilir in Sibu on Wednesday.

Chief Minister Pehin Sri Abdul Taib Mahmud said the site for the new resettlement would be in the Bandung area, further downriver from the site of the fire.

“I hope we can accelerate the resettlement in order to alleviate the suffering of these people,” he told reporters after the official launch of the RM1.2 billion Comtec Solar wafer manufacturing facility here yesterday.

Taib also expressed sadness over the loss of an important heritage of the Melanau-Malay community in Sibu as the two settlements were established by the community more than a century ago.

Meanwhile, Deputy Chief Minister Datuk Patinggi Tan Sri Alfred Jabu announced in Sibu that the State Government would give RM500,000 to victims of the fire.

He said the money would be channeled to the fire relief operations centre set up at Lembaga Amanah Kabajikan Islam Sibu (LAKIS).

“Hopefully, the money will help the fire victims resolve some of their financial woes,” he told reporters after a visit to the fire scene yesterday afternoon.

At the scene, Jabu said that the fire which swept through the two villages was beyond the control of even the best firefighters.

He said the inferno was fanned by strong wind which caused the fire to spread quickly across the road to other houses.

“We are working out details and would come up with a proper plan on how to rebuild the area.

“However, as the victims are still in a shock, all the initial proposals would be withheld and only to be carried out when they’ve recovered from the trauma,” he said.

At the moment, Jabu said LAKIS, Baitumal and the town’s mosque were providing food and accommodation to the displaced villagers.

He said the victims could approach Hamid or Annuar who had been appointed as the advisors of the fire relief committee for any assistance.

The blaze at 3.45pm Wednesday is believed to have started from a vacant house in Kampung Hilir. Fanned by strong winds, the fire spread rapidly to nearby Kampung Datu and almost reached the nearby Paramount Hotel.

Among properties and buildings destroyed was a surau in the heart of Kampung Datu.

As at 5pm yesterday, a total of 708 people from 99 families had been registered as victims of the blaze.

It is learnt 156 people from 32 families are staying in evacuation centres while the rest are putting up with friends and relatives.

Based on previous news reports, there was actually a plan to relocate the villagers before this, but now the fire has forced a resettlement.