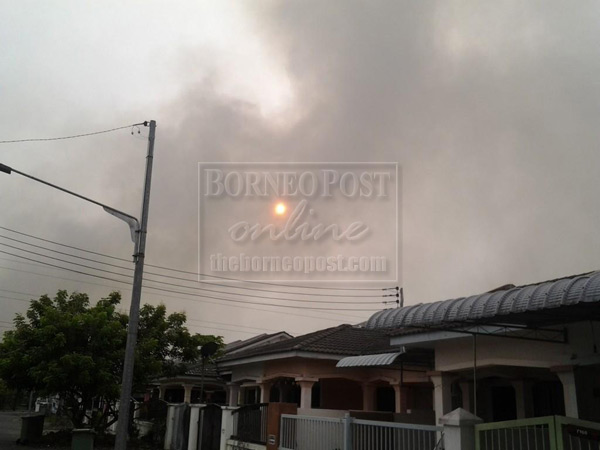 THICK SMOKE: The hazy situation in Tudan in Miri over the weekend where a bush fire was contained by the Miri firefighters.

MIRI: The Air Pollutant Index (API) reading here has improved as a result of firefighters dousing bush fires around the city and midday showers yesterday.

With the air quality improving, the SMK Merbau annual sports and track meet to be held at Miri Outdoor Stadium today will proceed as planned after earlier fears it may have to be postponed.

A teacher of SMK Merbau Peter Jampie confirmed that the sports meet would be held as scheduled today and tomorrow.

“We are not going to postpone it unless there is directive from relevant authorities that we should not do so,” he said when contacted by The Borneo Post yesterday.

Another school, SMK Baru Miri went ahead with its sports meet at the stadium last week.

Meanwhile, the Miri Zone fire chief, Law Poh Kiong, when contacted yesterday said that his department would continue to monitor the situation here.

“At the moment, we do not have any hotspots in Miri area, but I am not sure about other places in the state,” he said.

Law said his men had been battling bush fires in Tudan and the vicinity of Curtin University since last week caused by open burning by several irresponsible parties.

“We extinguished the fires in Tudan and its surrounding areas, including at Curtin University Sunday. That is why the API dropped on Sunday afternoon,” he explained.

As at 11am yesterday, Miri recorded API reading of 82, which is rated as moderate, the third highest in the state thus far.