Monday, May 23
You are at:Home»News»Sarawak»No rush in relocating fire victims 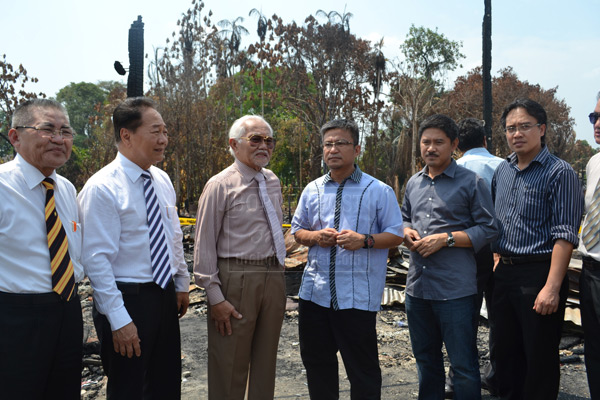 ON THE GROUND: Taib (third left) and others take a first-hand look at the razed ground in Kampung Datu.

Government treads carefully, residents to have say in re-development of razed villages — Taib

SIBU: Chief Minister Pehin Sri Abdul Taib Mahmud yesterday said the villagers of Kampung Datu and Kampung Hilir will have a say in how their razed settlements should be redeveloped, but he cautioned them against making hasty decisions.

Speaking to reporters while visiting the site of the two villages destroyed in the fire, he said the site had been proposed to be developed as an extension of Sibu town.

“It’s better that we (the government) don’t be hasty in considering the matter. I think they are now discussing (with Sarawak Land Custody Development Authority) to relocate to another site.

“As such, we leave it to them (villagers) to take a little longer to decide when they are ready to lead a normal life,” he said when asked whether the villagers would be allowed to rebuild their homes at the old site.

On donations which had poured in for the victims, Taib said he was thankful to the donors, and added that a total of RM1.4 million had been received so far.

He said it was heartening to see the generosity and kindness of so many people from all races and creed shining so brightly.

“It is the worst fire in the history of Sibu, and fortunately there were no casualties.”

In the June 19 inferno, the
worst ever in Sibu, a total of 60 wooden houses were razed rendering more than 700 people homeless.

Some of the victims are now sheltered in Sibu Jaya and some at the premises of Lembaga Amanah Kebajikan Islam Sibu (Lakis).