Monday, September 21
You are at:Home»News»Sarawak»PKPJ raises RM150,000 during charity dinner 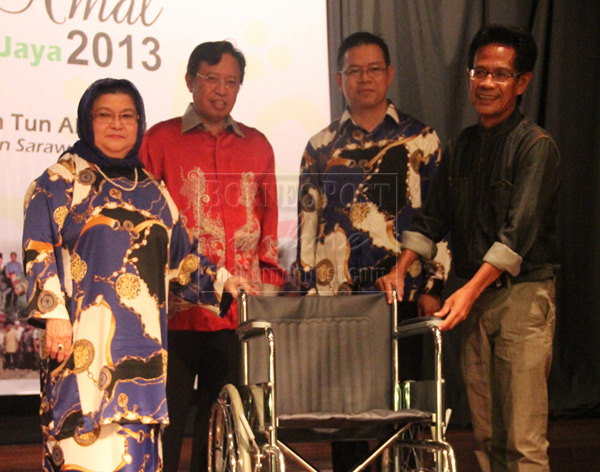 FOR YOU: Juma’ani (left) and Abang Johari (second left) presenting the wheelchair to Nah’s representative. 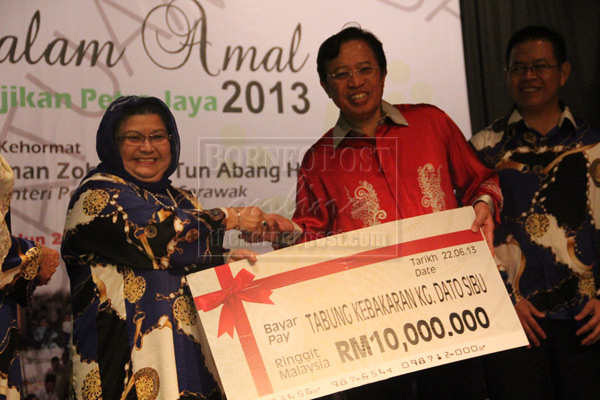 HUMANITARIAN GESTURE: Abang Johari (right) receiving the mock cheque for RM10,000 from Juma’ani on behalf of the fire victms.

PKPJ then donated RM10,000 from the proceeds to the fire victims of Kampung Datu/Kampung Hilir in Sibu.

The association chairperson Datin Juma’ani Tuanku Bujang who is the wife of Abang Johari, received the mock cheque.

At the event, PKPJ also presented a cheque for RM5,000 to Jabah Mingku, the widow of ASP Michael Padel who was killed in action at the recent Sulu intrusion in Lahad Datu, Sabah. In addition, an overhead table was presented to the state Health Department while a wheelchair and oxygen breathing equipment were presented to Nah Lan and Junaidi Putit respectively.

Meanwhile when addressing some 550 guests in her speech at the dinner held at the Riverside Majestic Hotel here, Juma’ani said: “We hold this dinner to raise fund to enable our association to play a more active role to help those in need. PKPJ has been active in providing aid to the community since 2007.

“This charitable body must be more active in organising charitable programmes including educational and social activities to empower the society. Since PKPJ’s establishment, we have helped about 183 individuals by providing aid up to RM83,000,” she said.

In light of the recent fire tragedy which left more than 600 people from over 100 families homeless, she said the establishment of charitable associations such as PKPJ can play its role to help the fire victims by providing various aids including health care.

Abang Johari, in his speech, proposed that PKPJ build a temporary shelter to help the rural people who are in need of accommodation when they migrate to the city. This project will provide shelter for those who are in transit or had just moved t here.

“There are cases of people who wanted to stay in the city for short but ended up with no place to stay. This usually happen to the poor folks. Some remain homeless. This project could help to reduce this problem and inadvertently reduce social issues,” he added.

He reminded that it is a tradition to help the unfortunate as one could not predict when tragedy would strike.