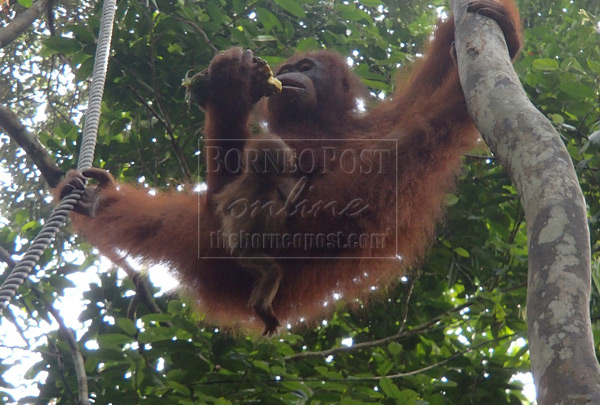 HELLO WORLD: Baby Ruby is seen clinging to her mother at the Semenggoh Wildlife Centre.

Sarawak Forestry Corporation (SFC) said in a press statement that mother orangutan Saddamiah was first spotted with her baby last Friday at the feeding platform, her first appearance since June 16.

The first-time mother, who is the second offspring of Seduku, was born at the Semenggoh Wildlife Centre in 2002.

Ali advised that because mother orangutans are usually very protective of their infants, visitors are advised not to get too close to them.

SFC will continue to monitor the progress of Saddamiah and Ruby.

The public are cordially welcome to participate in the orangutan conservation efforts organised by SFC, such as its Orangutan Adoption Programme and Heart-to-Heart with Orangutan.

Those interested in SFC’s conservation programmes can email [email protected] or visit www.sarawakforestry.com.