Saturday, August 8
You are at:Home»News»Sarawak»MASwings to acquire four new aircraft 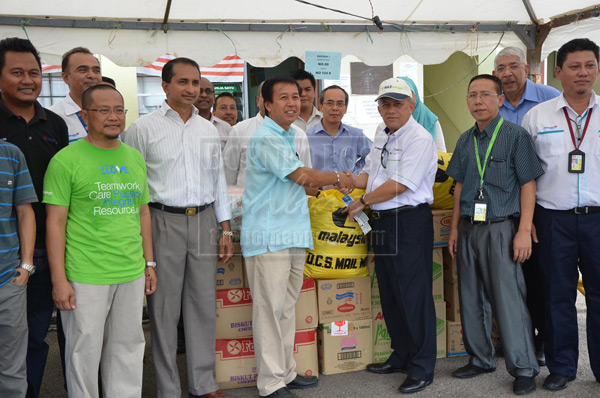 WINGS OF LOVE: Nawawi (third right) hands over a donation of RM1,000 and RM5,000 worth of goodies to Khalid Zaini, the donation coordinator of the fire relief committee.

He said they would be getting the new aircraft in three to four months’ time and three Twin Otter aircraft to boost its rural air service.

He added the Kota Kinabalu-based MASwings was also looking into a coupon system to allow passengers to buy tickets online.

“We are also looking into increasing flight frequencies, for example, additional three or four flights a day for the Sibu-Kuching route. The same goes to all other point-to-point between secondary towns in Sabah and Sarawak. Probably, in three to four months’ time, you will see marked improvement especially in flight frequencies.

“We hope to receive the two new aircraft by Sept 1 at the earliest, and the rest in October.

“We note of good response from the community on our flights and this is a good opportunity to expand our fleets,” he told reporters after handing over donation, collected from the company staff, to Kampung Datu fire victims at SK Lakis here.

He said the increase in flight frequencies was through their own initiatives on top of what had been asked by the
government.

“There is also good response from people from Pontianak to fly to Kuching, and Malaysians going there.

“So, with these additional aircraft, we want to increase the Kuching/Pontianak flight to twice daily from the present one flight daily.

“Likewise, there are loads from Tawau to Tarakan and we want to increase the flight to twice daily as well,” he said.

On the rural air service, he said they currently had four Twin Otter aircraft.

“We are adding three more by end of the year so that we can service the rural areas better,” he said.