Saturday, August 8
You are at:Home»News»Sarawak»RWMF needs to change to stay relevant — Abg Johari 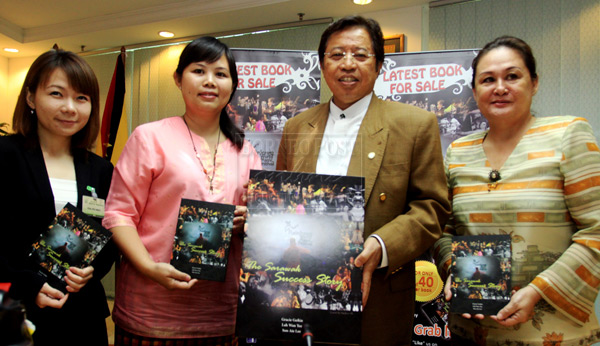 “We have to bring the event to another level with latest features to cater to people of all generations, else we will lose people so passionate about the festival,” Abang Johari said.

“To ensure the festival can sustain, we have to change with the passing of time to make the festival more attractive,” he said before the launching of the ‘Rainforest World Music Festival: The Sarawak Success Story’ book at his office at Bailtulmakmur Building here.

These success stories, Abang Johari said, created a platform for us to look deeply into the festival and how far we have come just by starting small.

“This is a book that brings the reader through a 15-year journey of music that became the pride of Sarawak. We will learn to appreciate the festival through this book,” he added.

Permanent secretary to the Ministry of Tourism and Heritage, Datuk Ik Pahon Joyik was also present at the launch.

According to one of the book’s authors Gracie Geikie, the book was a result of a survey conducted at the Rainforest World Music Festival (RWMF) last year.

“Initially, we were conducting a survey to gather statistical data about RWMF 2012,” she said.

“With those rich statistical findings, it was later decided that, with so much information on the event, it would be ideal to weave them into a story type book while capturing the essence of the RWMF’s 15-year journey,” she revealed.

The survey, endorsed by the Ministry of Tourism and Sarawak Tourism Board, was conducted by 22 enumerators and three supervisors.

More than 1,200 festival goers responded to the survey over the three-day the event.

“We took several months to compile, process and analyse the data collected before writing our findings,” she said.

“While it is based on survey findings, the 110-page book was not written in an academic way but more for leisure reading with inclusion of plenty of photographs,” she highlighted.

Geikie pointed out that the book could also be used as a resource material especially for event management students.

A total of 500 books will be distributed to universities worldwide.

The book, in both soft and hard covers, can also be purchased at the RWMF at the Sarawak Cultural Village which started yesterday until Sunday or online at www.ticketxpress.com.my.

The soft cover is priced at RM40 while the hard cover is RM60.