Saturday, August 8
You are at:Home»News»Sarawak»Shooting of ‘White Rajah’ film expected to start next year 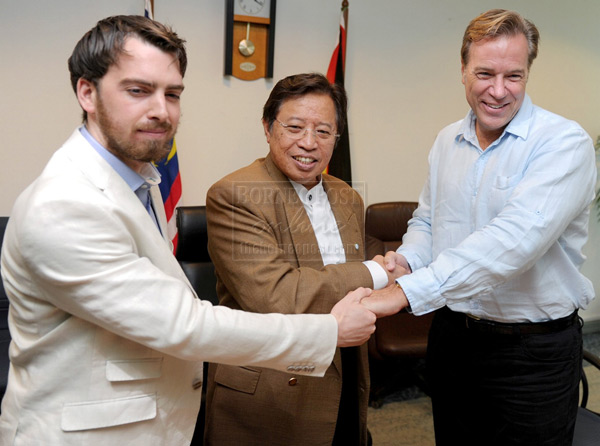 LENDING SUPPORT: Abang Johari shaking hands with Jason Brooke (left) and producer and Rob Allyn, at the introduction of the filming of the ‘White Rajah’ in Kuching yesterday. The film, to be shot in the state’s lush rainforest at a cost of US$15 million (RM48 mln), is expected to start next year.

KUCHING: The film ‘White Rajah’, with an estimated budget of US$15 million which tells the story of James Brooke falling in love with the beauty, wildlife and the Malay, Dayak, and Chinese cultures of Sarawak,is expected to be shot next year.

The chairman and CEO of Margate House Films, Rob Allyn said his production company is working in partnership with the Brooke Trust, which will serve as the film’s technical advisors, providing advice on historical content, design of buildings and watercraft to be reconstructed for the film.

“There are gorgeous beaches, jungles, rivers, wildlife, tourism amenities and state of the art film studios throughout the region, but to shoot all or part of this film in the country where the story really took place is a filmaker’s dream.

“So we came here at the invitation of the Brooke family and the government to walk in the Rajah’s footsteps, and explore whether it is feasible to shoot film this big here in Sarawak,” he said at a press conference, here yesterday.

“With the technical advice of the Brooke Trust and assistance from the Tourism Ministry and Malaysia and Sarawak governments, we plan to make an action-packed, romantic, swashbuckling adventure in the tradition of big screen epics like ‘Braveheart’, ‘Gladiator’, ‘The Man Who Would Be King’, ‘Lawrence of Arabia’ and ‘The Last of the Mohicans.

Elaborating on the film, he said Margate House Films and the Brooke Trust envision building a full scale, working replica of the ‘Royalist’, the schooner on which James Brooke sailed to Sarawak in the late 1830’s.

“The ‘Royalist’ is for use in filming the James Brooke journey and pirate battle.The vessel would remain in Kuching as a heritage attraction and living museum exhibit,” he said.

He also revealed that eight of the biggest British-Australian Hollywood actors are in the shortlist of potentials to play as Rajah Brooke in the films, but declined to name them.

“With Hollywood stars, hundreds of local and foreign crew, thousands of extras and the opportunity for substantial employment, film training and worldwide visibility, ‘White Rajah’ could be a significant boon to the tourism industry here. It would be the biggest-budget film ever made in Sarawak,” he said.

Meanwhile, Jason, whose grandfather Anthony Brooke was the former Rajah Muda during the Brooke era, said the Trust will fully support the efforts of filmmaking.

“The Brooke Trust is very pleased with the overall creative approach,attention to authenticity, sensitivity to the culture and history of Sarawak, quality of the script, and enthusiasm for the first Rajah Brooke story that Margate House Film has demonstrated.

“We are here in the hope that the film can be shot on location here. A film like the ‘White Rajah’ would be a great coup for the tourism, economy, visibilty, and image of Sarawak,” he said. — Bernama

Previous ArticleBeats of RWMF 2013
Next Article Looking for the answers