Monday, September 21
You are at:Home»News»Sarawak»G5 adopts ‘silence is golden’ stance 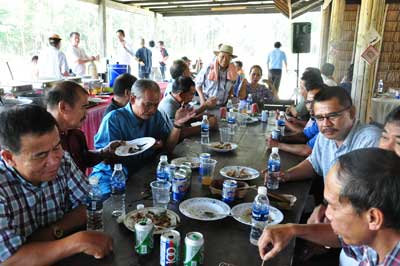 TIME TO LET THE HAIR DOWN: Nansian (standing, with hat) entertaining guests at the Borneo Tribal Village.

BAU: Members of the G5, the moniker for five officer-bearers who were sacked from Sarawak Progressive Democratic Party (SPDP) more than a year ago, are keeping their political cards close to their chests.

Their spokesman Datuk Peter Nansian kept mum when thesundaypost popped the question of reconciliation to him during the Gawai Ngiling Tikai at the Borneo Tribal Village in Kampung Apar, Singai, yesterday.

“We do not want to comment on the reconciliation, let SPDP president Tan Sri William Mawan (Ikom) say what he wants to say,” he said.

Members of the G5 were shown the door by SPDP for gross insubordination, and they have been partyless since then.

“Gawai is where we want to celebrate and meet each other in an informal way,” said Nansian.

He said Redeems Centre would be hosting the annual Gawai Carnival from July 5 to 6, and the highlights include the Dayung Sikora or Kumang Gawai Competition.

“This contest will see the champion of champions for all the finalists are champions from all Bidayuhs areas,” he said.

“The cultural centre would have a 30-door longhouse and a baruk for a stage,” he said, adding that other facilities and developments would be added in stages to turn the area into a 21st century village.