Saturday, August 15
You are at:Home»News»Sarawak»S’wak targets Silk Air, other airlines 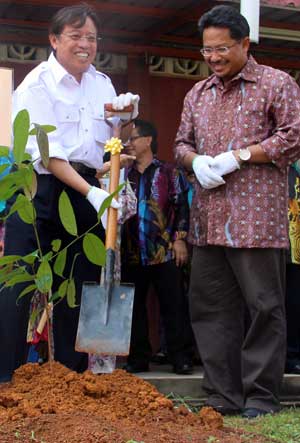 KUCHING: Sarawak is trying to get Silk Air of Singapore and several other airlines to expand their operations in the state.

“A delegation will be in Singapore next week to discuss route possibilities with Silk Air,” he told reporters after attending an event at Kolej Abdillah yesterday.

Abang Johari, who is also Minister of Housing, said he was also hoping that hybrid airline Malindo Air, which recently received four aircraft from the 100 they ordered, would add at least another connecting route to the state.

“We are also in discussion with Malaysian Airlines.”

“With Visit Sarawak 2014 to be launched alongside Visit Malaysia 2014 next year, we are looking at a return of around RM8 billion to the state economy,” he added, adding that RM6 billion was the targeted income from the tourism industry this year.

On the celebration of 50th years of independence through Malaysia, Abang Johari, who is the organising chairman, said various programme had been lined up for the coming months.

In line with this, he hoped the contractor of the sewerage system project in the city would cover up all dug up parts on protocol roads soon.