Saturday, August 15
You are at:Home»Features»Time for a bird park in Miri 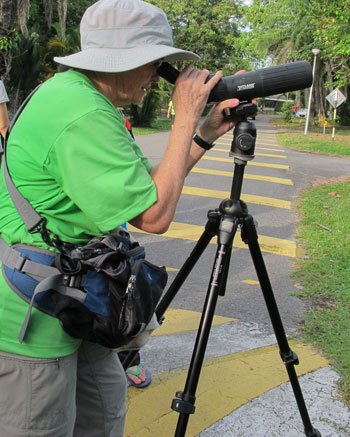 FOR several years, a small group of concerned Mirians have been lobbying to turn a small part of Piasau peninsula into a bird park before some bird species are gone forever in northern Sarawak.

Not because sailors are taking heads of the birds home as souvenirs but because development is zeroing in on prime land in Miri and Piasau Camp is considered one of the best sites for a glorious concrete jungle of the future.

Piasau Camp has been one of the green lungs of Miri and also a wind-breaker which protects the Resort City and Lutong from strong sea winds.

Any tsunami or oceanic surge will be blocked by this stretch of tree-lined peninsula. Miri city, less than 400M from the South China Sea, and the Miri River, must be protected from such storms.

There were ancient tales that the Bakam-Luak region was once washed away by a great wave — not unlike a tsunami — according to a conservationist Yusuf who is now working in Central Asia.

He is knowledgeable in offshore drilling and the geological structures of Borneo Island.

From a young age, he discovered from stories told by his grandfather why the Mirieks never built their houses along the seafront. The waves must have caused Sungei Lusut to split into two. Today, Miri has Sungei Lusut and Sungei Lusut Putus.

According to Yusof, the high ground of Sungei Rait has a strong straight cliff, facing the sea.

That probably represents the end of the waves as his grandfather must have narrated.

A cliff was then formed, leaving a long platform, which is now land, many metres towards Luak Bay.

Yusuf believes no houses should be built along the shoreline from the southern end of Luak in Sibuti, right up to Batu Satu in Lutong. Trees and other natural greens must be allowed to front the shoreline even if they are to only form a kind of windbreak.

Malaysia is only slowly waking up to having bird parks. There is a small one in KLIA to showcase a few birds.

On the other hand, the largest in the world, in fact just next door to Malaysia, is the Jurong Bird Park in Singapore, now in its 40th year.

Mirians are now facing a challenging time where birds are concerned. There have been sightings of some 100 birds of all colours and sizes at Piasau Camp and the surrounding Lambir, Baram River Mouth by members of the Malaysian Nature Society, Miri branch.

A pair of Oriental Pied Hornbill with two chicks have won the heart of Mirians. A small band of bird watchers have written some articles, a few blogs have been started and some facebook groups have gathered enough followers to even get politicians and local leaders involved.

Two recent Walk in the Park events attracted some 500 Mirians and expatriates to save the Piasau Bird Park.

The Oriental Pied Hornbill (OPH — anthracoceros albirostris) is a species in the Bucerotidae family. Its diet includes wild fruits (especially figs) and rambutans along with small reptiles such as lizards and frogs, and larger insects.

Piasau Camp has all the sustenance in its natural state for hornbills and other birds.

Save Piasau OPH is a vibrant Facebook Group supporting a pair of Oriental Pied Hornbills and their new nesting at Piasau Camp.

The OPHs are often seen sitting on tree branches and sometimes resting on very low shrubs about three feet tall. They seem to be fairly used to humans — unlike their brethren in the jungles. They are often seen resting on tall fences of the PBC tennis courts.

The objective for the Save Piasau OPH campaign is first and foremost to highlight the issue of the destruction of habitat and potential displacement of the OPH family from the Piasau area.

“With that, we also hope to raise the community’s awareness level about hornbills in our midst or this emblematic bird of Sarawak may be found elsewhere other than the Land of Hornbills,” Yusof said. 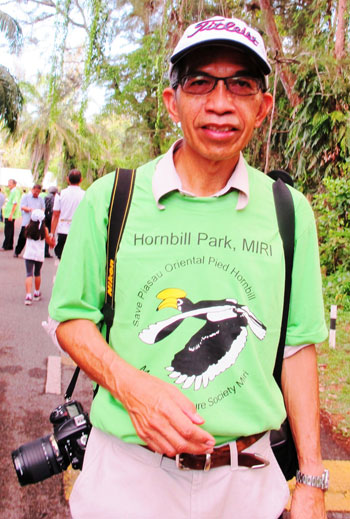 Richard Teo, an engineer, will talk to anyone in his appeal for support of the OPH.

“You can put my photo in the news anytime. It’s important we do something for the hornbills and all the other birds in this beautiful park,” he said.

Musa Musbah, the leading bird watcher and chairman of MNS (Miri branch), has been leading many bird watching excursions in Miri.

“The more concerned Mirians are about the birds around them, the better it will be for the bird population.

“We want people to know that there are lots of beautiful birds around. The media should also play a role in introducing these birds to the public and the world at large. It’s a good hobby to go bird-watching and know about birds. We must spread the word,” he said.

According to Musa, birds like the cattle egret and white-bellied sea eagle are protected along with the little egret, the intermediate egret, the hill myna, the sparrow hawk, the buffy fish owl, the brown wood owl, the white-collared kingfisher, the collared scops owl and the swiftlet which have all been spotted and photographed.

A document, recorded by Dr Giana Minton, a Shell employee in the early 90’s, is worth reading if you are interested in a very detailed description of her bird observation.

Another keen bird watcher, Dr Dominique Dodge-Wan, wrote an article for Borneo Post recently in which he noted: “Curtin Sarawak is lending its support to the Save the Hornbills campaign and would also like to provide our students with a unique opportunity to get to know the animals and plants surrounding us.”

The Piasau peninsula is home to a myriad of flowering and non-flowering plants as well as unique beach vegetation which form a natural food chain for the hornbills, other birds and the various wildlife.

Small insects are plentiful and in fact, the place is a paradise to those interested in botany and zoology.

A Kampung Pulau Melayu legend has it that even mermaids might appear to save lives when danger lurks. The legend could have been inspired by tales of dophins saving ship-wrecked sailors and fishermen in ancient times.

Many who know about the medicinal values of local plants have collected herbs here. Meedin, a local edible plant, is plentiful and can even be plucked by the roadside. You don’t really have to go far into the jungle to do that.

Lest we forget, the whole of Borneo spans 743,330 square kilometres and is home to one of the oldest rainforests in the world (130 million years old) which  shelters 13 primate species, 15,000 species of flowering plants, 3,000 species of trees, 221 species of terrestrial mammals and more than 680 species of resident and migratory birds.

A non-resident of Piasau Camp sums it up rather well: “It’s a safe and beautiful place for my family and I to walk here.

“We enjoy the trees, the birds, and the breeze. The air is fairly free from pollution and this makes this area different from the others in Miri. It should be partitioned off and made into a bird park. It is so natural and not much more needs to be done.”

The Piasau peninsula will not only be the pride of Miri Resort City but will also act a windbreaker, a herbal and special green park, a children’s paradise and a green lung.

Preserved in its natural state, it’s a special gift and a blessing to Mirians. 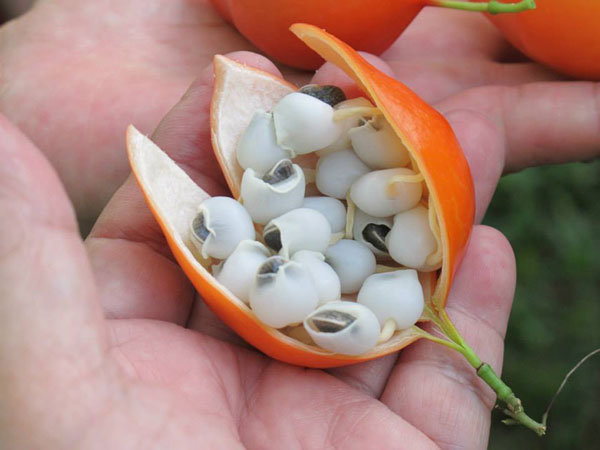 Adenia heterophylla: This fruit may have medicinal value and is a favourite of butterflies and birds. 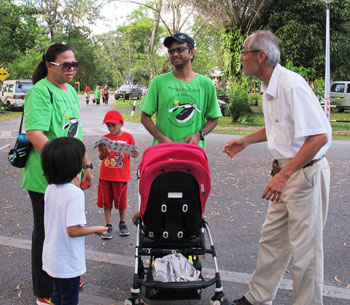