Sunday, June 7
You are at:Home»News»Sarawak»rTMS therapy recommended for psychiatric disorders 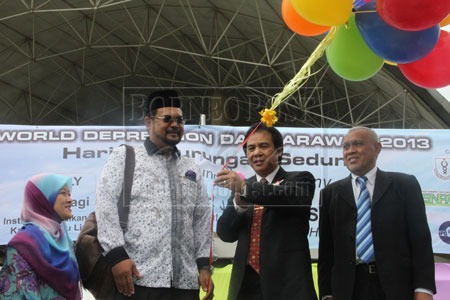 KUCHING: Members of the public who are suffering from psychiatric disorders, especially depression, are advised to go for ‘repetitive Transcranial Magnetic Stimulation’ (rTMS) therapy.

In recommending this, Assistant Minister of Public Health Dr Jerip Susil said rTMS therapy had been found to be successful and effective in treating depression.

The people here had begun to accept its usage although it has yet to be widely used in the state.

“Universiti Malaysia Sarawak (Unimas), in collaboration with Sarawak General Hospital (SGH), is the first institution in Borneo to introduce such therapy to treat people with psychiatric disorders.

“It is hoped its usage will be expanded to benefit more patients in Sarawak,” Dr Jerip said when officiating at the World Depression Day Sarawak 2013 at the Batu Lintang Teachers Training Institute here yesterday.

Also present was Unimas Psychological Department head Prof Dr Mohd Fadzillah Razak who is also the event organising chairman. The theme of the event was ‘Be inspired; say goodbye to depression’.

Dr Jerip who is also Bengoh assemblyman added that the National Health and Morbidity Survey (NHMS) in 2011 revealed that depression among the general population in the country was at a lifetime prevalence of at 2.4 per cent. This was also the average percentage for all states in the country.

“Research revealed that mental disorders occur at a higher rate in a stressful living environment particularly in big cities. Depression is also high among the unemployed and divorced people.

“World Health Organisation listed depression amongst the four main factors contributing to mental disorders, which include anxiety, insomnia and suicidal tendency. A study by the organisation predicted that by 2020, depression will become the second top disease after heart problems,” he continued.

Dr Jerip advised on the need to get rid of public stigma to provide better help for those with psychiatric disorders.

“There are many medication, psychiatrists, psychologists and counsellors that are able to identify and treat depression. Apart from all these, there is also the electro convulsive therapy which is effective to treat serious cases,” he said.

Mohd Fadzillah noted that there is a slight increase in depression cases since the NHMS was last conducted in the state five years ago. He was quick to explain that the increase in cases was due to the increase in public awareness to come out and seek treatment.

“The main cause of depression cannot be specifically pin-pointed to any known factors but is more of an integration of many factors. Those with stressful life events, psycho-social problems, finances, marital issues are prone to go into depression. Those with a family history of depression (genetic contribution) also have a higher chance to develop the condition.

Adding that the rTMS therapy was first studied in the country around 2003-2004, he pointed out that the therapy is also used by neurologists to rehabilitate stroke patients. Data has shown encouraging results.

It is understood that rTMS therapy has been tested as a treatment for various neurological and psychiatric disorders including migraines, Parkinson’s disease, dystonia and tinnitus.

The opening ceremony yesterday was followed with a seminar and afternoon workshop involving members of the public especially those involved in taking care of individuals suffering from psychiatric disorders.