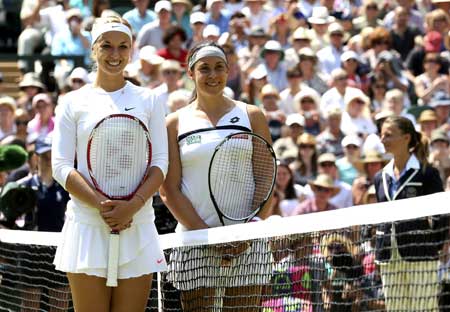 FIRST APPEARANCE: Sabine Lisicki of Germany (left) and Marion Bartoli of France pose for a photograph before their women’s singles final tennis match at the Wimbledon Tennis Championships, in London. — Reuters photo

Bartoli, 28, is the fifth oldest woman to become a first-time Grand Slam winner in the Open Era.

Six years after losing to Venus Williams in the Wimbledon final, Bartoli returned to Centre Court and finally ended her long wait for a major crown with a supreme display of power hitting.

She took just 81 minutes to rout 23rd seed Lisicki, who broke down in tears as the match slipped away in the second set.

“Honestly I just can’t believe it, as a little girl I dreamt of this moment for so long,” Bartoli said.

“Finishing with an ace to win Wimbledon, even in my wildest dreams I couldn’t have imagined that. I’m just so happy to be holding this trophy.

“I missed out here in 2007. I know what it is like and I’m sure Sabine will be here one more time, no doubt about it.”

Lisicki, who was undone by 25 unforced errors, said: “I was just overwhelmed by the whole situation, but credit to Marion. She handled it perfectly. She’s been on the tour for a long time and deserves this.

“I still love this tournament. I just hope I get another chance as well.”

By finally winning her maiden major title in the 47th Grand Slam appearance of her career, Bartoli surpassed the previous record set by Jana Novotna, who won Wimbledon in 1998 after 45 appearances at the majors.

Bartoli, who will climb to seventh when the latest world rankings are released on Monday, didn’t drop a single set in her seven matches and is the first Frenchwoman to win a Grand Slam singles title since Amelie Mauresmo at Wimbledon in 2006.

Ironically, Mauresmo has played a key role in Bartoli’s remarkable renaissance over the last two weeks.

Bartoli’s career had been on a downward spiral in recent years and she hit rock bottom in February when she struggled with the emotional decision to move on from her dad Walter, who had coached her since childhood.

She eventually turned to Mauresmo for help after failing to strike up a rapport with a series of coaches and her compatriot has brought a calmer approach to Bartoli’s preparations.

Bartoli was broken in the first game, but Lisicki then surrendered her own serve in error-strewn fashion.

Lisicki, 23, was a shadow of the bold stroke-maker who stunned defending champion Serena Williams in the fourth round.

But Bartoli had shaken off her early anxiety and took advantage of Lisicki’s nerves to break again for a 3-1 lead.

Throughout her career Bartoli’s game has been marked by bizarre routines as she jumps, skips, shuffles and twirls her racket before serving or returning.

And her quirky routine was on full display as she took the attack to Lisicki in the sixth game, breaking to seal the set thanks to a series of punishing forehands.

Lisicki had every reason to hang her head as she trudged off court to gather her thoughts during a bathroom break before the start of the second set.

The German finally held serve for the first time in the match when she returned to start the second set.

She then mounted her only serious threat to Bartoli’s dominance, earning four break points in the second game, only to see the Frenchwoman come up with a series of blistering winners.

Bartoli had scented Lisicki’s discomfort and landed the decisive blow with a break to move 2-1 ahead.

Lisicki’s beaming smile and all-action style had made her the darling of the Centre Court crowd this year, but this was a miserable end to her fairytale run and she was in tears when she served at 3-1 down.

Bartoli showed no mercy, breaking again as she took a 5-1 lead.

With the title within touching distance, tension crept into Bartoli’s game and Lisicki was able to prolong the battle longer than expected.

But Bartoli eventually settled back down and sealed the biggest win of her life with an ace before climbing into stands to share a joyous embrace with Mauresmo and her father. — AFP