Sunday, September 20
You are at:Home»Sports»Froome points finger at dirty generation 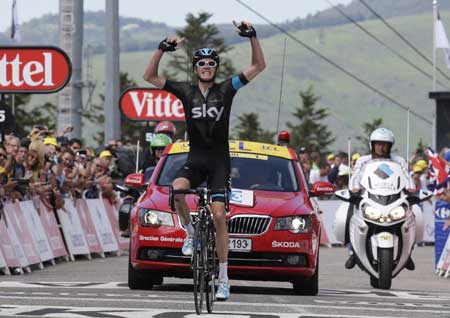 AX-TROIS-DOMAINES, France: Tour de France leader Chris Froome fired a broadside at a cycling generation tainted by doping scandals as he insisted he is racing “100 percent” clean at the world’s biggest and most notorious bike race.

Kenyan-born Briton Froome capped a stunning performance on the first day in the high mountains with a memorable victory on stage eight which handed him the race’s fabled yellow jersey.

Teammate Richie Porte finished second at 51sec as several of Team Sky’s rivals, including Spaniard Alberto Contador and Australia’s Cadel Evans, spectacularly fell off the pace on the final climb to Ax-Trois-Domaines.

According to unconfirmed French television reports, it was the third-fastest time recorded for the 7.8km climb to the Pyrenean summit.

It also prompted comparisons with those of US Postal, the team led by disgraced American Lance Armstrong who has been stripped of all seven of his race victories after admitting to doping throughout his career.

Asked whether the world could believe his and Team Sky’s performances were not being artificially enhanced, Froome replied: “Yes, 100 percent.”

And he claimed today’s peloton is racing far cleaner than those of “five to ten years ago”.

“The sport is in a much better place now than it has been for the last 20 or 30 years,” added Froome.

“Any of the results (in the sport) now, are definitely a lot more credible. The question should be asked about people who were winning races maybe five, ten years ago, when we know doping was a lot more prevalent.”

After finishing runner-up to teammate Bradley Wiggins last year in a dominant campaign by Team Sky, Froome came to the 100th edition as the man to beat.

He has won several major races this season, while Contador has been mediocre.

Contador admitted prior to the Tour he was not on top form and hoped to race into his peak during the three-week epic.

The Spaniard, a two-time winner (2009, 2011) who was stripped of his 2010 title after a positive test for clenbuterol, was spectacularly left in Froome’s wake on Saturday.

Used to leaving his own rivals in his wake during his peak years, the Spaniard struggled to match Sky’s pace and came over the finish 1min 45sec in arrears to drop to 1:51 behind the Briton.

The Australian admitted Sky’s “really consistent” pace on the 15 km to the summit of the Pailheres mountain pass left him short for the ensuing 7.8 km trek to the finish.

“When you’re in the running for GC (general classification), seven kilometres is not a climb that you would normally get dropped on, but on the last climb I had a few problems to get into the mix,” said Evans, who recently finished third overall at the Giro d’Italia.

“I couldn’t even push myself to my maximum and at that point, when you see 20 guys riding away from you, you know you’re a long way off the pace.”

Froome said it was “normal” for people to question impressive performances given the sordid history of the sport.

“But I know the sport has changed. There is absolutely no way that I would be able to get these results if it hadn’t changed.

“For me, it is a bit of a personal mission to show that the sport has changed. I certainly know that the results I’m getting are not going to be stripped in 10, 20 years time.