Wednesday, May 19
You are at:Home»News»Sarawak»‘Pulut Panggang Kak Yam Noor’ a hit at Sibu Ramadan Bazaar 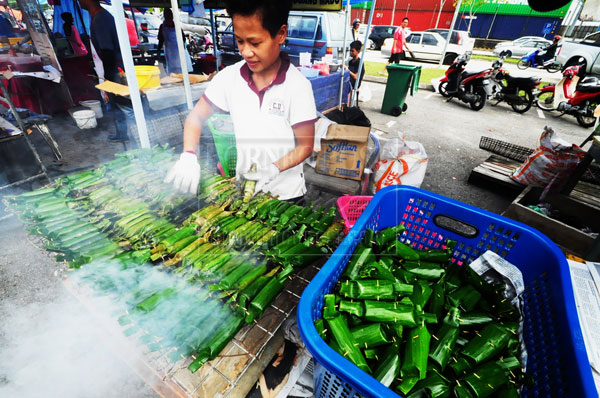 SIBU: ‘Pulut Panggang Kak Yam Noor’, a traditional Malay offering of glutinous rice wrapped in a banana leaf and then barbecued, is enjoying brisk sale at the Ramadan Bazaar here.

Vendor Noor Bakar said he had been selling pulut panggang for the last 33 years.

He said Pulut Panggang Kak Yam Noor is special as great care is always taken to preserve its distinctive and appetising taste.

“We only use natural coconut milk,” he said when met at his stall at the bazaar yesterday.

Noor disclosed his family made about 2000 pulut panggang per day during the Muslim fasting month of Ramadan.

‘Pulut Panggang Kak Yam Noor’ Noor is sold at RM1 for two. Those with `sambal’ is priced at RM1 each.

“During Hari Raya, demand for our pulut panggang would normally increase,” he said, adding he had help from his wife Mariam and children.

Noor, 63, said on normal days, he could sell about 700 of this local delight at their stall in Kampung Hilir.

“Our customers are not only locals. Over the years, our pulut panggang have found its way to Middle East countries, including Dubai, Vietnam, Singapore and Brunei.

“This was made possible through staff of Malaysia Airlines, AirAsia and friends. They would drop by my stall before flying off to various destinations worldwide.”