Thursday, July 7
You are at:Home»Features»Fond memories of a sunset venture 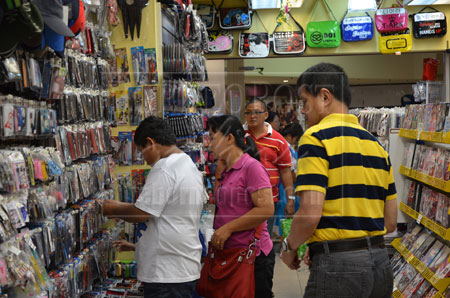 STOCK CHECK: James checking the turnover of his stocks.

PEOPLE used to spend hours at a record shop, searching for their favourite songs but now, they can get the latest releases with the touch of a button.

In bygone days, songs were stored in vinyl records and cassettes and almost everyone had some sort of collection.

But the emergence of state-of-the art technology has changed all that, and nowadays in Kuching, we hardly see dealers of vinyl records and cassettes around anymore — only a handful is left.

thesundaypost recently met up with James Yang who used to be in the business of selling vinyl records and cassettes but is now running a music store at Sarawak Plaza in Kuching. Fifty years on, he still loves what he is doing.

His recollections of the good old days were tinted with sadness that the sun will eventually set on the retailing of vinyl records and cassettes, if it not already has. 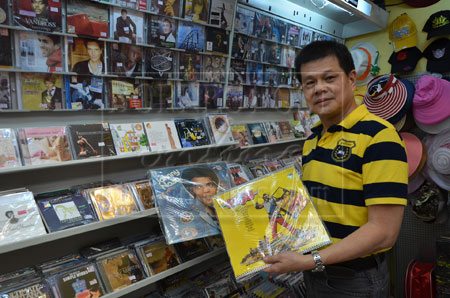 PRIZED RELICS: James showing a sample of vinyl records popular in the late 60’s and 70’s but are no longer sold in his shop.

“At the height of the business, 30 million copies of the top songs could be sold in a month. It was really lucrative back then,” he recalled.

For most people who grew up in the 60’s, it was hip to be in a record stop, especially if they knew the music and the songs of the time.

Usually, the shop would be packed with buyers and collectors, looking for the latest albums or singles of their favourite artistes.

James who took over the business from his late father (Yang Kheng Lam) in 1968, said they started out by selling vinyl records and cassettes at Electra House in the heart of Kuching town.

Back then, sales were mainly for the UK’s top 40 songs as well as albums and singles of pop stars from the US, HongKong and Taiwan. The music industry in Malaysia was just budding at that time. 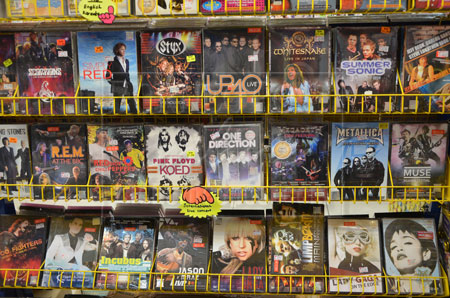 There were many great singers and bands that people followed during that period – Elvis Presley, Cliff Richard, Ricky Nelson, Jim Reeves, Connie Francis, Sketter Davis, Petula Clark, Helen Shapiro, The Shadows, The Beatles, The Who, The Rolling Stones, The Doors, and nearer home, The Quest, Wang Ching Yuen and Naomi and The Boys of Singapore, and even our home grown recording talents, Rose Iwanaga and Janice Wee.

He remembered the only Malayan songs and albums available back in the 1950’s were those of the legendary P Ramlee.

“He had a big following of admirers and fans,” James said of the entertainment and movie icon of Malaya and Singapore at that time.

When James was in Form One, his father decided to venture into the music business from selling books and stationery.

He said the switch came after his father went on a business trip to Taiwan.

“He told us selling vinyl records and cassettes would be something new for Kuching – and he was right. There was demand for that kind of entertainment before the visuals took over and split the market in Southeast Asia.” 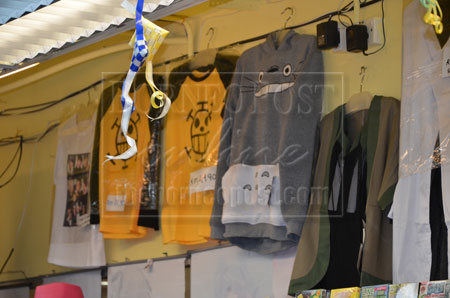 DIVERSIFY: Apparels and Tee-shirts give customers a wider choice of merchandise.

James said the vinyl record and cassette business was able to flourish during those times because of the emergence of the pop genre through British vocal quartets like The Beatles and The Rolling Stones; US bands like The Deep Purple and soloists like Elvis Presley, Cliff Richard, Rod Steward, Elton John, Diana Ross and many more.

Later, a new wave swept through the pop scene with the appearance of groups like The Three Degrees, The Eagles and Abba.

Vinyl record and cassette shops, riding the crest of this pop wave, were packing in buyers and collectors during weekends.

“I guess there were no other forms of cheaper entertainment back then. Those hits of yesteryear sold out very quickly and their quality was so good that they remain just as popular today,”James said.

With the pop music industry booming in the early 70’s through to the 1980’s, coupled with the emergence of new beat and sound, sales of vinyl records and cassettes reached at an all-time high. 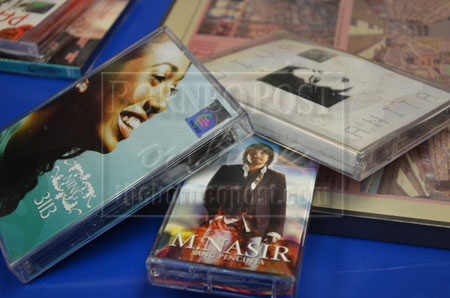 OFF THE SHELF: These song cassettes of Malaysian artistes are not sold anymore at James’ shop.

James recalled: “A record or a cassette fetched up to RM20 and above apiece. This stretched on till the 1980’s and only slowed down when pirated copies flooded the market.

“About that time, downloading of songs from the Internet also came on line with new technology. Soon, the vinyl record and cassette business started to feel the pinch.

“Before that, the turnover was always good during weekends and festive times because of the influx of people into Kuching.”

James said most of the orders were placed with dealers in Kuala Lumpur and Singapore.

Later, new products such as compact discs and video cassettes (DVD) coming out of these two places also flooded the market, virtually sealing the fate of vinyl-record-cassette dealers, he added.

Those days, vinyl records and cassettes took longer to produce — unlike now when hit tunes can be burnt into a cassette or disc in no time.

For James, the songs, singers and bands of the 60’s 70’s and 80’s were much better than their current counterparts.

“In fact, the oldies are still very popular and frequently played over the local radio station,” he noted.

James reckoned the most successful Malaysian songs were recorded by the group Raihan in the 1990’s.

“Before that, it was Alley cats in the late 1970’s and the 1980’s. Till now, I have not seen any other Malaysian artistes making it like these two groups.” 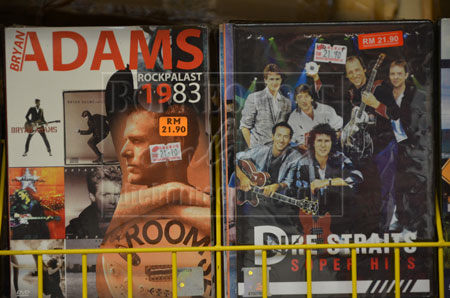 James’ wife Liza who also loves music, is the inspiration that keeps him going in the business.

“I loved the songs he played at his shop and that was probably one of the reasons why I married my husband.

“I would just hang around the shop all day to get his attention,” Liza said light-heartedly.

“Our interests and knowledge of songs around that period were a bonus. We were able to tell customers what was the latest hit and help them decide what to buy.

“By knowing the songs, you can give customers better advice and they, in turn, feel confident about your decision and choice.

“On weekends, you could really feel the atmosphere — and it was even more exciting during the festive seasons when our shop was always packed.”

Liza said when they moved to Kuching Plaza, the market was still very attractive.

“We met up with many friends. And some customers even brought their children to our shop. Sadly, we don’t have that kind of rapport anymore – it’s just business as usual.”

She noted that the demographics had changed and people now did not appreciate pop music as much as the old days.

“We had people looking for songs in vinyl records and cassettes and we usually gave them our remaining stocks. These collectors are from Kuala Lumpur and Singapore.”

James and Liza agreed that while they relied on technology to get things done everyday, they also felt technology had somehow “killed” the vinyl-record-cassette business.

“We knew change would come some day and to stay in business, we need to diversify. So we are now selling other entertainment-related merchandise as well,” James disclosed.

Their present shop does not focus on songs and music alone but also the latest DVD movies and animations.

The couple still believe in music, saying without music, life will be less beautiful.

They are grandparents now and they feel blessed through the music they love and the business they hold dear.

“I admit technology kills our industry and many dealers are struggling but then life without music is like people without soul. That will be very dull,” James said.