Tuesday, July 5
You are at:Home»Columns»Nature Matters»The tale of the twisters 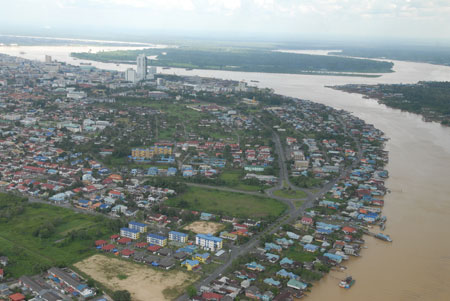 ROUND THE BEND: Sibu town is built along the banks of the mighty Rajang River.

SOME of nature’s most beautiful patterns are river meanders, especially when seen as sinuous curves while flying several thousand metres above Sarawak.

This sinuosity can equally be experienced on a Sarawak River cruise or in a longboat along the Kinabatangan River in Sabah. Boating along these rivers – because of the numerous bends, seeming to loop back on one another – a traveller often loses sense of direction.

The actual word meander comes from the Latin word ‘maeander’ derived from the Greek, as the name given to the Maiandros River, in what is now Turkey, for its notoriously winding course.

Why do rivers adopt meandering courses? This question has baffled Leonardo da Vinci, Albert Einstein and subsequent leading fluvial scientists in the last century and today. The complexity of this conundrum has intrigued researchers in fluvial geomorphology, fluid mechanics, river engineers and flood control experts all to little avail.

In the late 1960s, the British Hydrological Research Institute, at its base in Wallingford, set up a huge river flume (tank) to study the reasons why a river meanders. After 18 months of river modelling, the final paragraph of its report concluded that the researchers were none the wiser.

At that time, fluvial experts in universities in the Unites States of America through similar experiments and fieldwork revealed that meanders were the natural river channel’s methods of expending the velocity of a river to achieve the maximum efficiency of a river’s flow, at any one point and time, in the discharge of water along its channel.

In a deep valley near my home in Somerset, United Kingdom, for over 20 years, I have observed the meanders of the River Tone whilst daily walking my dogs along the river banks in all seasons of each year. I have observed the changing shape of this meandering river at overbank (flood), bankful and underbank (low flow) conditions.

With the help of my Geography students, I have surveyed and carried out fieldwork, along a 2km-stretch, in which there are 20 or more bends in this river. Yes, I have collected much data on the behaviour of the river but I am still ignorant as to why that specific river meanders.

Very few rivers have straight courses unless engineered by man to take the shortest route through a particular place. If we take the deepest points of a river channel and join them together with a line, we see the river’s thalweg (from German, meaning valley path).

Thus, this is the line of maximum velocity. Whilst a river may run through a straight section in its course, the thalweg winds from side to side within the river with a series of deeper (scoured out) pools and shallower (depositional) riffles. This simulates the profile of a meandering river.

Even though water is passing downstream in one direction, there is a secondary flow of water on the river’s surface moving towards the centre of the river and then downwards, with a movement of bottom water outwards towards the river banks and upwards. The river is not only flowing forwards but also sideways producing a helical or corkscrew motion of the whole water mass.

The thalweg of a meandering stretch of river is close to the outside curve of each bend and then is deflected over to the next bank. On the outside bend, the river expends much energy in undercutting the bank and then with reduced energy it slides across to the inside bank to deposit the material it is carrying.

Upon the deposit of its load, there is a surge in river energy and the pattern is repeated downstream as the helical flow of the river moves across to the next outside bank.

Inevitably this combination of erosion and deposition at the river’s bends produces an asymmetric channel shape with deeper water (pools) on the outside of the channel and shallower water (riffles) in areas of deposition on the inside of the bends.

Meanders appear to arise from a variety of interacting factors as an attempt by a river to transport water as efficiently as possible off the land surface into the sea. Certainly the helical movement of water within a river’s channel has a significant part to play in producing a meandering river pattern.

Mathematicians define meanders as “sine generated curves formed by chance processes”. Therefore it may be argued that a river’s meandering habit is the most probable river channel pattern. Interestingly, a sine-generated curve is the curve of minimum work that metals assume on bending.

View for yourself an aerial photo of the derailment of coaches at a train crash. The eureka moment will occur when a researcher discovers the answer to the conundrum but best assured that it will be related to the continuous erosion, transportation and deposition of the material through which a river flows and the ability of a river to adjust to its environment.

A river is a natural system constantly endeavouring to reach a state of equilibrium by self-control of its velocity as it meanders. Occasionally the system will break down and crash out as in the case of flooding through torrential rainfall.

Such a surge of water energy will see a river break through a meander neck to take the shortest route forwards. When the river gradually subsides it will, through deposition, leave an abandoned meander or an oxbow lake. These features are worldwide, as evidenced in my local river, along the Sarawak and Kinabatangan rivers, at the billabongs in Australia and the bayous in Louisiana, USA.

Whatever the causes of meandering, just wonder at their patterns and the fauna and flora that they perpetuate in your local rivers and streams at different times in the year.

As for me, walking along my local river, I thrive in seeing river otters, kingfishers, herons, wild ducks and the brown river trout skimming along the thalweg with an occasional splash as they snap at the mini mosquitoes.

Two weeks ago I disturbed a red doe drinking in a meander bend. What a sight to behold as she bounded along the meander only four metres away from me and disappeared up the river’s bank and into an adjacent field.