Thursday, June 4
You are at:Home»News»Sarawak»Calm in troubled waters 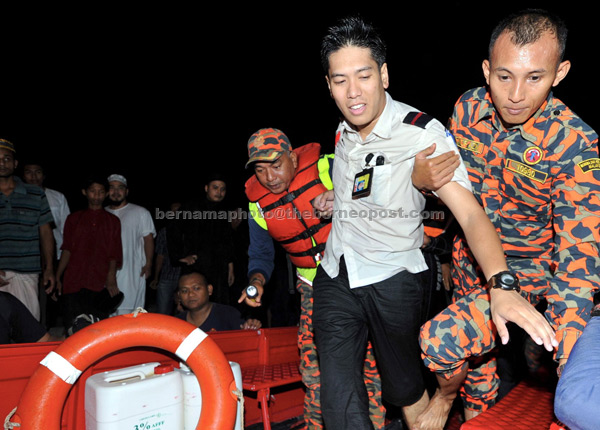 SAFE AND SOUND: Faeroz being brought ashore by the rescue team after floating in the sea for almost an hour. – Bernama photo 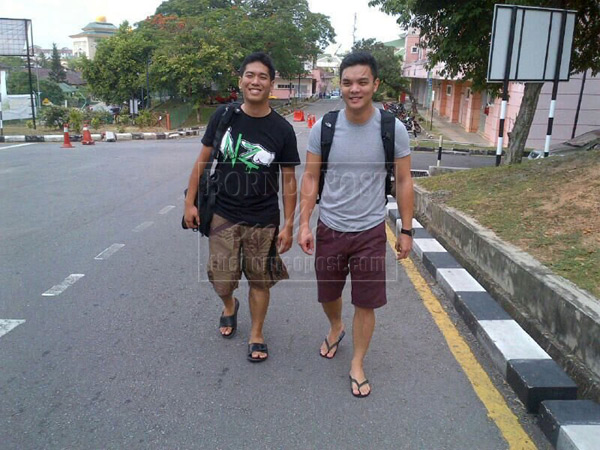 UNDETERRED: Faeroz (left) and Soh who suffered minor injuries in the crash will continue to pursue their dreams of becoming pilots despite the harrowing experience.

KUCHING: The harrowing experience of being involved in a plane crash will not dampen Faeroz Kamil’s childhood dream of becoming a pilot.

The 27-year-old pilot along with trainee Soh Hsien Choong and flight instructor Sharon Yee were on a training exercise when technical difficulties led to the Piper PA-28 aircraft belonging to the Malaysia Flying Academy (MFA) crashing into the Straits of Melaka near Pulau Melaka around 8.15pm on Tuesday.

“In fact, I will press on and continue with my flight training after the Hari Raya festivities,” Faeroz Kamil told The Borneo Post despite experiencing the ordeal only two days ago.

When contacted yesterday, Faeroz admitted that he could not recall the last moments of impact as “everything was so dark then.”

“However, when I realised that water was rapidly surging into the plane, I shouted at Soh and Yee to get out as soon as possible,” he recalled, adding that the aircraft began sinking within a minute after the trio clambered out.

According to Faeroz, Yee was seriously injured on her forehead and needed help to swim to the shore.

“Soh, who was a former water polo player, had to help her because she could not see anything after knocking her forehead on the aircraft controls during the accident.

“I lagged behind because I was not very good at swimming and to top it off, the three of us were not wearing safety jackets,” he explained, pointing out that both he and Soh suffered only minor injuries.

Faeroz also let on that what saved him that fateful night was a torchlight he had with him while he was drifting in the choppy sea.

“I saw the Masjid Selat mosque which was located along the beach and approximately 500m from where I was floating and shouted for help,” said the courageous lad who was floating in the middle of the ocean without clinging on to anything for almost an hour before being rescued by the Fire and Rescue team.

“At first, I was fearful and worried as I was not wearing a safety jacket…but I knew I needed to do something to stay alive.

“So, I calmed myself and tried to keep afloat as best as I could because I was too tired to swim far. I also used a flashlight to attract the attention of the people around the mosque,” Bernama reported him as saying in Melaka Hospital yesterday.

Meanwhile, Minister in the Prime Minister’s Department Nancy Shukri was shocked when news came to light that her son was involved in the plane crash.

However, upon hearing that he had been rescued and was well taken care of, she breathed a sigh of relief that Faeroz as well as his friends were safe and sound.

“I am also very happy that he has since been discharged from the hospital and right now shopping with his father for a new mobile phone to replace the one he lost during the crash,” she said when contacted.

Nancy also said that she was extremely touched when Malacca Chief Minister Datuk Wira Idris Haron personally called her to inform that her son was unharmed in the crash and was by his side at the hospital.

“No words can describe how thankful I am that Faeroz and his friends are safe from the crash,” she remarked and pointed out that prior to the incident, her son had called her to inform her that he would be breaking his fast in the aircraft and that the night before, he also underwent the same flight training for two hours.

“Nevertheless, I would also like to remind Faeroz to stay focussed on his flight training and pray that he and his friends remain safe during their future trainings.”

In view of the incident, Nancy also released an official statement thanking all who were involved in rescuing her son and his friends.

“I would like to express my sincere gratitude to the Melaka Chief Minister, police, fire and rescue personnel, Melaka Hospital and everyone involved directly or indirectly in the efforts to save my son and his friends.

“I also appreciate Datuk Wira Idris Haron who took his time to visit them at the hospital and for giving me the opportunity to talk to my son on his mobile phone,” she said in her official statement.

According to reports by Bernama, Jalan Kubu Fire and Rescue Department chief Yazid Mohd Tahir said the station received a distress call at 8.41pm and their rescue team arrived at the scene shortly with a boat and 15 divers.

Yazid said Yee and Soh managed to swim about 400m to reach the shore before seeking help from the congregation at the Masjid Selat mosque where incidentally Idris was also present.

He also said the search and rescue operation was able to locate Faeroz near the site of the wreckage at 9.30pm.

“When we arrived at the location where the aircraft had crashed, Faeroz was seen floating but not holding on to anything, except a torchlight to indicate his location,” he said, adding that the cause of the crash was still under investigation.

Meanwhile, Melaka deputy police chief Datuk Shah Gzali Khan Shahadat said the Marine Police and Fire and Rescue Department would continue to search for the aircraft after calling off the operation at 11pm on Tuesday night.