Thursday, July 16
You are at:Home»News»Sarawak»MMEA foils smuggling of controlled items 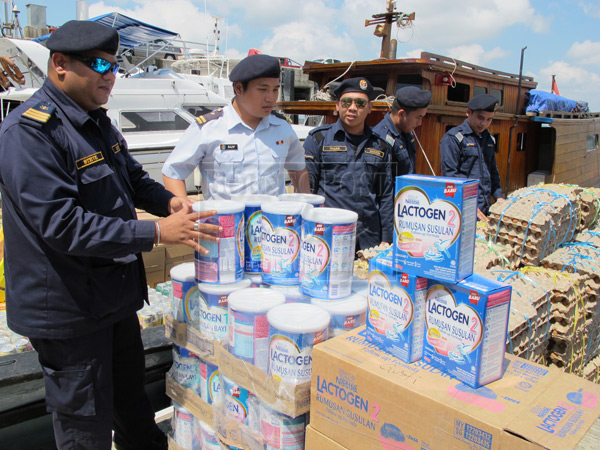 CONFISCATED: Steve (left) with his men checking out the seized goods.

Four Indonesians aged between 36 and 49 were also detained for shipping the controlled items without any authorised document.

MMEA Kuching district operations director Sheriff Steve Mac Queen Abdullah said this was the first attempt to smuggle controlled items they had foiled this Hari Raya season, and the second registered in Sematan this year.

“It also takes the total number of cases to 32 so far this year. Sematan is the gateway – by means of water – to Indonesia where smuggled items can be sold on a small island there.

“During festive seasons like Hari Raya Aidilfitri, the demand is there. Hence, people buy here (in Malaysia) and then sell off there (Indonesia),” he told a news conference at the Sarawak MMEA Complex in Muara Tebas near here yesterday.

Steve pointed out that the seized cargo boat had allegedly violated Veterinary Public Health Ordinance 1999, and confiscated items would be handed over to the state Veterinary Department for further actions.

He said the agency would not rule out the possibility of similar cases cropping up before the end of Ramadan month.

“We expect more shipment of goods without legal papers like this before the celebration of Hari Raya Aidilfitri. To effectively combat smuggling, we need the public to come forward with useful information.

“With public tip-off, the agency will be able to take actions immediately by stopping controlled items being transported out of the country in an illegal manner.”

To a question, Steve believed that people of Indonesia would have already learned that shipping controlled items in excessive quantities out of Malaysia illegally means infringing the law.

“They must go through the proper procedure if they want to bring some goods home. People there are generally aware of the law.”